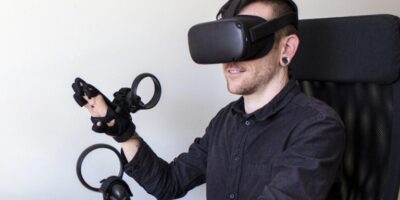 At CES next week, BeBop Sensors will announce the Forte Data Glove, claimed to be the first virtual reality (VR) haptic glove integrated and exclusively designed for Oculus Quest, Oculus Link, Oculus Rift S, Microsoft Windows Mixed Reality, HTC Vive Cosmos, HTC Vive Pro, HTC Focus Plus, and Varjo VR headset technology. It is also the first haptic glove for the HTC Cosmos and for the Microsoft Windows mixed reality headsets, including HP, Lenovo, Acer, Dell, and Samsung, through integration with the HP Reverb. In addition, it is believed to be the first haptic VR glove to fully support Oculus Quest Link, which allows Oculus Quest to leverage the graphics capabilities and processing power of a VR computer for higher end VR interaction, says BeBop Sensors.

Described as the first affordable, all-day wireless VR/AR (augmented reality) data glove, the VR headset/data glove fits in a small bag for portability and requires almost no set-up, bringing VR enterprise training, maintenance and gaming to new areas. The Forte Data Glove ushers in the next generation of VR, says BeBop Sensors, by allowing people to do real practical things in the virtual world with natural hand interactions to feel different textures and surfaces.

Up to 16 haptic sound files can reside on the glove and new files can be rapidly uploaded over Bluetooth or USB.

The sensors are fast, operating at 160Hz, with instantaneous (sub six millisecond) response. By providing touch feedback, the user experiences a more realistic and safer training for business and enhanced VR gaming experiences, says the company.

The universal open palm design fits most people and the glove can be cleaned, is hygienic and breathable with waterproof sensors.