Wearables show how flexible they can be 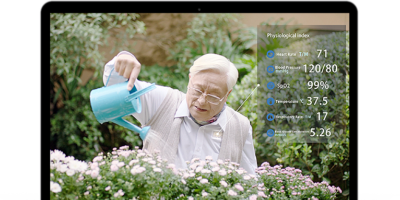 Just as phones shape-shifted from the clunky 1980s’ model, to the ‘Mars bar’ phone and then the slim, sleek iPhone, experts believe wearable devices will also reduce in weight and size, while introducing new functionality, writes Caroline Hayes.

There has been some interesting research into ultra-thin sensors that can monitor respiration, heart rate and temperature. Dubbed electronic tattoos, the ink is not etched onto the skin, but onto paper for transfer on to the skin using adhesive tape or water, like a child’s temporary tattoo.

ABI Research has identified flexible, body-worn sensors as a significant contributor to the wearable healthcare market.

An electronic tattoo is a non-invasive way to monitor biometrics. (Photo credit: Rotex)

“As an ultimate form factor of wearables, flexible body-worn sensors are quite an innovation for wearable adoption in healthcare, fitness, and human-machine interface,” says Marina Lu, senior analyst at ABI Research. She goes on to explain that the sensors can be integrated into a patch, for electronic tattoos or kin sweat sensors, for example, and can be attached to the surface of the skin to track vital signs and other biometrics.”

So-called electronic tattoos are sensors that can monitor health conditions in real-time and also control devices as part of the IoT. They are disposable and low cost, using electronic inks or graphene. As a short-time measure, they can be a painless, convenient way to wirelessly measure and monitor heart, muscle and brain electrical activity for an electrocardiogram (ECG), electromyogram (EMG), and electroencephalogram (EEG) functions.

The concept of the electronic tattoo was introduced in 2011, when John A. Rogers, a professor of materials science at the University of Illinois at Urbana-Champaign, experimented with conventional materials, such as silicon, that were thin but also serpentine-shaped so that they could be flexed without breaking, to create flexible, stretchable electronic devices.

The tattoo could be twisted and pulled without breaking and could conform to the topology of the human skin, and stretch and move with the skin.

Initially, Rogers used a custom-made substrate before moving on to the idea of a commercially available, temporary tattoo.

Rogers packed in LEDs for visual feedback, photodetectors and radio transmitters and receivers alongside the sensors. Its small size meant that it only drew minimal power, although it also relied on energy harvesting to keep the weight low as no battery would be required.

The e-tattoo developed by Rotex is thin, soft and lightweight. (Picture credit: Rotex)

One company, Rotex, established in 2015, claims to have developed the thinnest, softest and lightest biometric sensors that can conform to skin movement and even the finest wrinkles, says the company. Its e-tattoo can be used for ECG, EEG and EMG monitoring, and can also synchronise the tracking of respiration, temperature, hydration, and movement.

At the University of Texas, at Austin, researchers have designed a graphene-based tattoo that can be applied to the skin with water. It really is like the child’s temporary tattoo – it uses the properties of graphene to monitor biometrics (heart, respiration and brain activity) and could be used for human-machine interactions too, propose the researched, led by Deji Akinwande and Nanshu Lu.

The graphene tattoos are temporary, operating for two days and can be peeled off easily using adhesive tape.

The tattoos are made of graphene and coated with an ultra thin backing layer of transparent polymer poly (methyl methacrylate) (PMMA). The graphene/PMMA layer is transferred to a piece of ordinary tattoo paper, and carved into different patterns, again using the serpentine ribbon structure for flex and stretch characteristics, to make different types of sensors.

To apply, the graphene side is placed on the skin and water is applied to transfer the graphene from the paper, in the same manner as applying a conventional temporary tattoo. The graphene tattoo functions for around two days and can be peeled off using adhesive tape.

The tattoo is 460nm thick and the graphene/PMMA bilayer optical transparency is approximately 85 per cent, making the tattoo barely perceptible and more stretchable than human skin, reports the research team. The ability to conform to the skin increases signal fidelity, to provide medical-grade data quality, superior to that gathered by rigid electrode sensors mounted on bands or strapped to the wrist or chest.

Co-author Shideh Kabiri Ameri told Physics magazine that the tattoos can be part of a healthcare IoT. “In the area of human machine interfaces, electrophysiological signals recorded from the brain and muscles can be classified and assigned for specific action in a machine,” she said. “This area of research can have applications for the internet of things, smart houses and cities, human computer interaction, smart wheelchairs, speech assistance technology, monitoring of distracted driving, and human-robot control”. Soon, she promised, they will report on the group’s demonstration of graphene tattoos used for sensing human signals to wirelessly control flying objects.