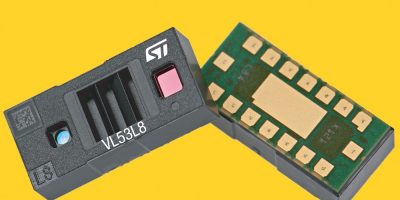 Metasurface lens technology is introduced by STMicroelectronics in its second generation, FlightSense multi-zone direct time of flight (ToF) sensor. The VL53L8 uses less energy and can range twice as far as existing products, said the company.

The FlightSense ToF ranging sensor for smartphone camera management and augmented reality / virtual reality  (AR / VR) offers up to four metres in range in all zones indoors, while reducing the power consumption by half compared to the previous-generation device, operating in common conditions.

What is claimed to be the world’s first optical metasurface technology was developed in partnership with Metalenz. It enables optical systems to collect more light, provide multiple functions in a single layer and deliver new forms of sensing in smartphones and other devices, in the form factor of a single, compact package, added ST.

This second-generation ranging sensor incorporates an efficient optically diffractive metasurface lens technology, manufactured at the company’s 300mm fab in Crolles, France. The VCSEL driver is three times more capable than the previous generation with an efficient VCSEL, enabling the VL53L8 to deliver twice the ranging performance of earlier VL53L5 or reduce power consumption by 50 per cent, when operating in comparable conditions. It delivers this performance while maintaining the same field of view and discrete output-ranging zones (4×4 at 60 frames per second or 8×8 at 15 frames per second).

The VL53L8 adopts a metasurface lens technology in both the transmit and receive apertures and delivers 16 or 64 discrete ranging zones with stable and accurate ranging, said ST.

The sensor is housed in a single reflowable component that offers 1.2V and 1.8V I/O compatibility for ease of system integration. It is also claimed to significantly reduce the host processor loading over the demands of the first-generation sensor.

Like all other FlightSense ToF proximity sensors, the VL53L8 retains an IEC 60825-1 Class 1 certification and is fully eye-safe for consumer products with an advanced lens detach detection system.

The VL53L8 can be used in smartphones and tablets in both user-facing, like object tracking and gesture recognition, and world-facing applications, such as laser-autofocus, camera selection, touch-to-focus, and flash dimming. It is also suitable for accessories in personal electronics equipment (e.g. smart speakers and AR / VR and mixed reality (MR). The VL53L8 will deliver even greater benefit to these features in low-light conditions, said ST. It can also support indoor/outdoor detection and smart-focus bracketing, as well as consumer lidar, where depth mapping is required.

The VL53L8 is entering mass production now for select customers.