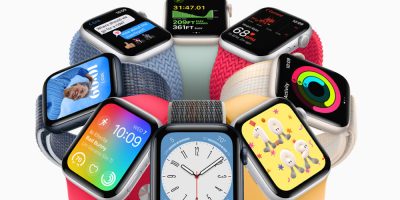 Features for women’s health are enabled with the addition of a temperature sensor in the Apple Watch Series 8. The sensor introduces temperature-sensing capabilities, retrospective ovulation estimates, crash detection and international roaming. The design is much unchanged from earlier Apple watches with a large, always-on retina display and a strong crack-resistant front crystal.

The watch has an all-day 18-hour battery life and includes health and safety features like the ECG app and fall detection by introducing temperature-sensing capabilities, retrospective ovulation estimates, crash detection and international roaming.

One feature is temperature sensing which is used to monitor the menstrual cycle. The temperature-sensing capabilities give women further insights into their health, designed with the same privacy protections as with all other health data.

Apple Watch Series 8 uses a two-sensor design, one on the back of the watch, nearest the skin, and another just under the display, this reduces bias from the outside environment.

Night time wrist temperature can be a good indicator of overall body temperature. The sensors in the Apple Watch Series 8 sample the wrist temperature during sleep every five seconds and measure changes as small as 0.1 degrees C. In the Health app, users can see nightly shifts in baseline temperature, which can be caused by exercise, jet lag, or even illness.

The same temperature-sensing capabilities can receive retrospective ovulation estimates. Knowing when ovulation has occurred can be helpful for family planning, via the Health app.

Additionally, with iOS 16 and watchOS 9, all Cycle Tracking users can now receive a notification if their logged cycle history shows a possible deviation, such as irregular, infrequent, or prolonged periods, and persistent spotting, which can be symptoms of underlying health conditions.

Apple developed an advanced sensor-fusion algorithm that leverages a new, more powerful gyroscope and accelerometer on Apple Watch, which now has the highest dynamic range accelerometer in any smart watch. To create the algorithm, data was collected from these new motion sensors at professional crash test labs with common passenger cars in simulated real world accidents, including head-on, rear-end, side impact, and rollovers. In addition to motion data, Crash Detection uses the barometer, GPS and the microphone on iPhone as inputs to detect the patterns that can indicate during a severe crash.

When Apple Watch detects a severe car crash, the device will check in with the user and dial emergency services if they are unresponsive after a 10 second countdown. Emergency responders will receive the user’s device location, which is also shared with the user’s emergency contacts. When combined, Crash Detection on Apple Watch and iPhone work seamlessly to get users help efficiently. When a severe car crash is detected, the emergency services call interface will appear on Apple Watch, as it is most likely to be in closer proximity to the user, while the call is placed through iPhone if it is in range for the best possible connection.