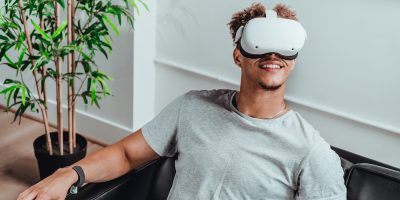 A wearable keyboard and controller is the latest development from Tap Systems, following on from its earlier Tap Strap, worn over the knuckles (like an office knuckle-duster – Ed).

The TapXR is a bracelet, but input control is still via the wearer’s fingers through tapping.

Users can use the bracelet to type, input commands and navigate menus. It allows fast, accurate, discreet, and eyes-free texting and control with Bluetooth devices – from phones, tablets and smart TVs to virtual and augmented reality headsets, said Tap Systems. The user taps their finger (of the hand wearing the bracelet). TapXR senses the user’s finger taps on any surface and decodes them into digital signals.

It has a six degrees of freedom inertial measurement unit (6 DOF IMU) for the hand and finger tracking and is supported with open source software development kits.

According to Tap Systems, it uses a set of uniform and intuitive commands for a seamless experience, wherever you are tapping. Each command is activated via a simple finger tap on any surface, even in low light situations.

While conventional hand gestures are slow, error prone and tiring, tapping is fast, accurate, and does not cause visual or physical fatigue, continued Tap Systems. Users have achieved typing speeds of over 70 words per minute using one hand. Unlike hand tracking which supports relatively few gestures and has no haptic feedback, TapXR has over 100 commands and is inherently tactile.

“TapXR solves a critical problem with mass adoption of AR/VR/MR. Up until now there has been no way for users to comfortably interact with these headsets. Users will now be able to type, select menus and interact faster, without fatigue, and with tactile feedback,” said Dovid Schick, Tap’s CEO. “This enables far wider usage of XR for things such as productivity, commerce and the metaverse.”

The TapXR is claimed to have over 99 per cent accuracy and has a battery life of 10 hours and 14 days standby.

TapXR is programmable and customisable; users can create, share and save their own macros, hot keys and pre-sets or they can download any of the thousands of user created maps for languages, apps and utilities.