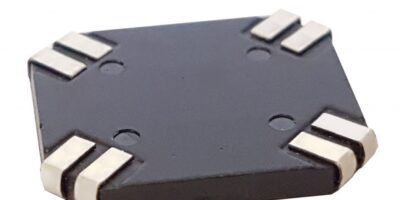 With a profile of only 1.65mm, the 3DC14EM-ULP is a 3DCoil electro-magnetic sensor and is ready to integrate in smartphones, key-fobs, smartcard-key-fob, and wearable devices, says Premo.

According to Premo, the 3DC14EM-ULP is the smallest in height available on the market today. Most of the 3D-electromagnetic sensors in the market have a height of around 3.2mm. The smallest height before Premo introduced the ULP series was 2.5mm.

The sensor has been a two-year collaboration using a joint ecosystem development effort between BQ, UC3M University and Premo, under the CDTI Spain research project called ASUMP.

The sensor measures 12 x 14 x 1.65mm, suitable for integration in thin devices such as smartcard type keyfobs, standard automotive keyfobs, special miniaturised keyfobs (sport keys), smartphones (to be use as a digital key with the same user experience of current PKE access), and other devices such as hand-held controllers where electromagnetic motion tracking technology (EMMT) is used for six depth of field (DoF) applications, such as high precision motion tracking system with no limitation in the line of sight, ultra-low latency, low power consumption.

The 3DC14ULP has three axes (X-Y-Z) and is 100 per cent encapsulated in epoxy to provide full functionality for wakeup, and six DoF position/orientation, even with movement tracking, adds Premo. There are different versions available, based on quasi and fully isotropic 3DCoilM configurations depending on whether the application requires trimmed and non-trimmed performance.

Parts will be delivered in tape-and-reel for SMT pick-and-place according to EIA 481 (1000 pcs/reel). They are engineered to be RoHS- and REACH-compliant and tested to endurance in conformity with AECQ200 for automotive and wearable applications.