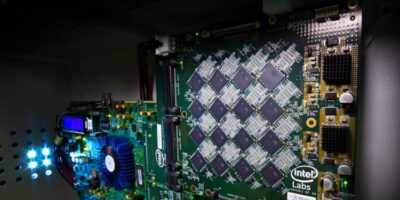 An eight million neuron system, comprised of 64 Phokiki Beach chips, the codename for Loihi chips, is now available to the research community. The neuromorphic system will allow researchers to experiment with Lohi, Intel’s brain-inspired research chip, which applies the principles found in biological brains to computer architectures. Loihi enables users to process information up to 1,000 times faster and 10,000 times more efficiently than CPUs for specialised applications like sparse coding, graph search and constraint-satisfaction problems.

The early results success has led Intel to make Pohoiki Beach available to over 60 ecosystem partners, who will use the system to solve complex, compute-intensive problems, explained Rich Uhlig, managing director of Intel Labs.

Availability means researchers can now efficiently scale up neural-inspired algorithms — such as sparse coding, simultaneous localisation and mapping (SLAM), and path planning — that can learn and adapt based on data inputs.

Intel Labs hopes to scale the architecture to 100 million neurons later this year.

As new complex computing workloads become the norm, there is a growing need for specialised architectures designed for specific applications. This will be achieved by continued process node scaling in the same vein as the power-performance increases achieved by Moore’s Law.

“With the Loihi chip we’ve been able to demonstrate 109 times lower power consumption running a real-time deep learning benchmark, compared to a [graphics processor unit] GPU, and five times lower power consumption compared to specialised IoT inference hardware,” said Chris Eliasmith, co-CEO of Applied Brain Research and professor at University of Waterloo. He continued: “As we scale the network up by 50 times, Loihi maintains real-time performance results and uses only 30 per cent more power, whereas the IoT hardware uses 500 per cent more power and is no longer real-time.”

In another research project, Loihi has been used in a neural network that imitates the brain’s underlying neural representations and behaviour. “The SLAM solution emerged as a property of the network’s structure,” explained Konstantinos Michmizos of Rutgers University. “We benchmarked the Loihi-run network and found it to be equally accurate while consuming 100 times less energy than a widely used CPU-run SLAM method for mobile robots,” he said.

Later this year, Intel will introduce an even larger Loihi system, named Pohoiki Springs. Intel’s engineers expect that measurements from these research systems will quantify the gains that are achievable with neuromorphic-computing methods and will clarify the application areas most suitable for the technology. This research paves the way for the eventual commercialisation of neuromorphic technology.