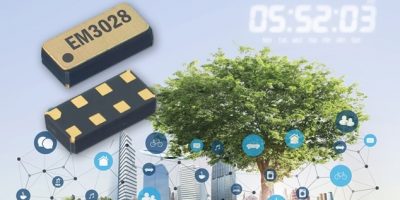 EM3028 extends battery life by 50 per cent, compared to its closest competitor, at double the accuracy, claims EM Microelectronic. It extends the device life span at a reduced overall bill of materials cost, it adds.

The EM RTCs provide sleep and wake-up timing for power-hungry elements, with no need to frequently charge or replace the batteries in a wearable device. The EM3028 can be used as a companion for EM Microelectronic’s energy harvesting solutions; in certain applications, there is no charging or battery replacement throughout the complete device life span, claims the company.

The high accuracy and long-term stability of this RTC guarantee consistent performance throughout the device lifetime without the need to calibrate during manufacturing. Its one ppm accuracy guarantees 30 seconds precision over one year. This figure is twice as good as the best-in-class RTC previously on the market, says EM Microelectronic, yet energy consumption is equivalent to four water drops per day.

The RTC module features an integrated backup switch and, its low power operation of 40-nanoA current consumption, allows waking up a sleeping device even years after it has been switched off.

Other features of EM3028 include a 32-bit UNIX timer, operating voltage range as low as 1.2V, a plug-and-play and factory pre-calibrated non-volatile configuration setting guaranteeing the configuration and user parameters are never lost, even in case of system power fail.

The EM3028 is available as a standalone IC or in customised, application-specific modules, in combination with other parts from the EM Microelectronic portfolio, such as energy harvesting controllers, EM9304 Bluetooth low energy chip and sensors.