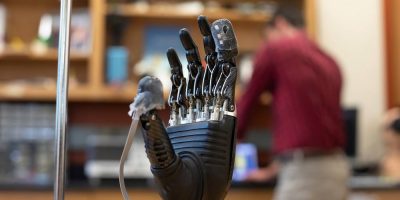 Research on prosthetic hands is yielding some exciting developments for a sensitive ‘skin’ that can add a sense of touch, reports Caroline Hayes

Two research projects could bring a sense of touch to prosthetic hands. The first is a stretchable polymer artificial skin that has sensors, developed by researchers from Seoul National University and US researchers (Figure 1).

The elastic, transparent silicone material, polydimethylsiloxane or PDMS, is designed to coat prosthetic limbs. Sensors made from silicone nanoribbons are integrated in the material and generate an electrical feedback signal when stretched or squashed. The e-skin can also detect whether surfaces are hot or cold and uses capacitors to detect humidity.

Tests showed that the e-skin’s humidity readings were similar to those produced by commercial sensors detecting moisture levels. The skin could tell by poking a series of nappies, which were dry and the degrees of wetness in others. The skin was also fitted with heating elements to match the temperature of human skin.

To test the transmission of sensory data, the team, led by Dae Hyeong Kim, linked the skin to nerve-simulating electrodes and test the skin on rats. The data transmitted successfully, but the team could not identify the extent that the rat could feel heat and pressure.

A team at Johns Hopkins University used fabric and rubber that was ‘laced’ with sensors to create artificial skin that could be layered onto prosthetic hands’ fingertips. This model was reported to create not just a sense of touch but also pain by sensing stimuli and relaying the impulses to the wearer’s peripheral nerves.

Mimicking the network of receptors in human skin, the e-dermis stimulates peripheral nerves in the arm to provide data about the object the skin is in contact with, for example whether it is smooth or sharp (Figure 2).

Figure 2: The e-dermis stimulates peripheral nerves in the arm to provide data about objects it is in contact with Photo: Larry Canner, Johns Hopkins University

The research team, members of the Biomedical Engineering, Electrical and Computer Engineering and Neurology departments of Johns Hopkins and members from the Singapore Institute of Neurotechnology, tracked brain activity via electroencephalography (EEG) to determine that the test subject was able to perceive these sensations in his ‘phantom’ hand.

The researchers connected the e-dermis output to the volunteer using transcutaneous electrical nerve stimulation (TENS) and conducted a task to assess if pain could be detected. The team concluded that the test subject and the prosthesis were able to experience a natural, reflexive reaction to pain while touching a pointed object and non-pain when touching a round object. Work is continuing to enable the e-dermis to detect temperature as well as curves and angles.

Finally, researchers at the University of Illinois have developed an algorithm that is claimed to provide more reliable electrical feedback to nerve endings than is currently possible with prosthetics due to the wear and tear on sensors disrupting signals.

The control algorithm moderates signals and adjusts them to allow for damage or removal of electrodes and sensors in the prosthetic.

The research by Aadeel Akhtar, a PhD student at the university was published in Science Robotics. The next step is to continue testing and develop the module that will house the algorithm, which has to be integrated into the prosthetic limb.

Akhtar described his goal as wanting “users to be able to reliably feel and hold things as delicate as a child’s hand. This is a step toward making a prosthetic hand that becomes an extension of the body rather than just being another tool.”