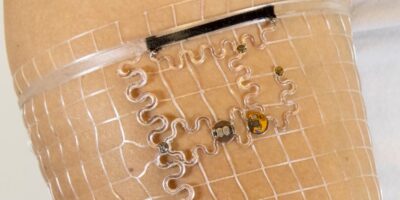 At CES 2022 in Las Vegas this week, Powercast is highlighting its RF wireless power technology in a 3D – printed wearable monitor which can be used by both out-patients at home and athletes to monitor their biomedical signals. The flexible monitor was developed by researchers at the University of Arizona.

The monitor can be charged 24/7 using Powercast’s wireless power technology. The flexible devices are based on flexible circuits which are lightweight and can be worn anywhere on the body for periods of several months, says the company. In the case of out-patients, they can wear the device of 30 to 60 days and carry out their normal activities while the flexible monitor continuously collects data which can be used for diagnosis.

The device includes advanced sensors, which are capable of monitoring accuracy “far beyond the current capabilities of a smart watch”. These include inertial measurement units (IMUs) and strain sensors that can characterise gait and the performance of individual muscle groups. While these are familiar sensors in smartwatches, the device also includes sensors that would not be embedded in a consumer device, such as sensors that are able to detect the contraction or expansion of the wearer’s muscle.

The nature of the flexible substrate means that the mass of temperature sensors is high, making it easy to track temperature, explained the researchers.

They also include high resolution temperature sensors which are able to detect subtle changes in body temperature that can be used to characterise performance in athletic training.

The always-on device is used with a Powercaster wireless charger which will recharge the monitor over the air.

The research team is currently working towards clinical trials and expect a flexible monitor based on the wireless charging technology will be available in around two years’ time.

Founded in 2003, Powercast has specialised in RF wireless power and applications that meet FCC and other global standards. Its wireless power technologies eliminate or reduce the need for wires and batteries, working at distances up to 80ft. Powercast has 63 early and fundamental patents worldwide and 34 patents pending.