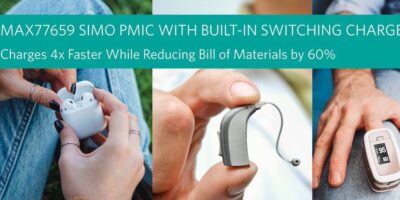 It can be used for wearables, hearables and IoT devices faster and in less space than any other PMIC available today, continues the company. It integrates a switch-mode buck-boost charger and three independently programmable buck-boost regulators, sharing a single inductor. The regulators extend battery life by operating at 91 per cent efficiency during moderate to heavy load conditions while consuming only 5.0 microA of quiescent current during light load conditions. The MAX77659 SIMO PMIC supports autonomous headroom control, which reduces heat dissipation by minimising the voltage drop while providing enough headroom to regulate the charging current.

Roger Yeung, executive business manager for the battery power solutions business unit at Maxim Integrated which is now part of Analog Devices. Says the PMIC extends the concept of on-the-go by “minimising plug-in time and maximising play time”. Its compact dimensions as a result of integration free up board real estate to include additional features for portable consumer and medical devices, such as expanded memory storage, location tracking and vital sensing, he adds.

There is also an accompanying evaluation kit, the MAX77659EVKIT, also available now.