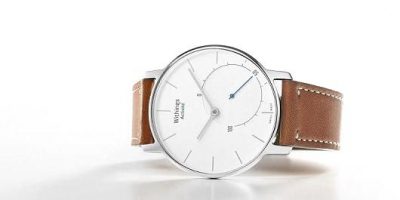 Nokia has announced plans on to buy French wearables maker Withings for 170 million euros ($191.8 million) as the Finnish network equipment maker jumps back into the consumer market with digital health technology.

“We have identified digital health as a key for us. It fits the company, not just strategy of playing in the internet of things (IoT) space, but of connecting people to health and guiding them to healthier and happier lifestyle,” Ramzi Haidamus, president of Nokia Technologies, a division of the company, told CNBC by phone.

“What Withings provide us is with is an accelerated pace into the market, an outstanding team, a great product portfolio…and great insight.”

The deal comes two years after Nokia sold its device division to Microsoft, effectively taking it out of the consumer market. Since then it has focused on its networks business, which forms the bulk of its revenues, and its licensing business. Nokia still has a large patent of portfolios that it can license to to other companies.

But the deal with Withings, which makes products ranging from activity-tracking smartwatches to smart security cameras for the home, brings Nokia back into the consumer goods space.

Cedric Hutchings, the chief executive of Withings, will lead the business within Nokia to try and “integrate the Nokia capabilities into theirs” and grow the products’ footprint globally, according to Haidamus.

The Nokia Technologies president said the company has two teams – one in Silicon Valley and one in Finland. The team in the U.S. is focusing on “preventative healthcare”, focusing on analytics and building apps. In Finland, Nokia’s employees are working on technology for patient care in hospitals. The company is hoping to integrate some of this tech with Withing’s devices.

Haidamus also revealed that Nokia is looking into the branding strategy of the Withings devices, and did not rule out the Finnish company’s names ending up on the devices.

“The Nokia brand is one of the most recognizable, the Withings brands has deep expertise in health which Nokia doesn’t have. What we have started today is a research project which should conclude before the close of the deal to tell us what the banding strategy will be. It’s a work in progress,” Haidamus told CNBC.

Nokia’s acquisition is expected to close in the early part of the third quarter of 2016, subject to regulatory approvals.

Another benefit for Nokia is the intellectual property (IP) they are acquiring alson with Withings. The business has generated a significant amount of business thanks to its huge patent portfolio, which it licenses to other manufacturers. While Haidamus did not say whether Withings patents could be licensed, it’s clear that Nokia’s focus on IP will continue.

“Anytime you are in consumer electronics market, it is a great way to enrich your patent portfolio. So we will be continuing to aggressively file and protect the digital health space in addition to the 100,000 patents we already have,” Haidamus said.

The latest push into digital health is the latest step in Nokia’s bid to take a foothold in new areas. It recently launched the $60,000 virtual reality camera called OZO. But Haidamus said the acquisition of Withings and the push into VR is the focus and the company for now.