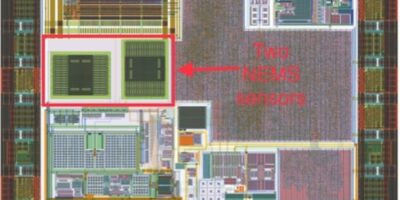 Since pioneering sensors built inside CMOS, Nanusens has announced that its proprietary technology can increase the operational life of earbuds by up to 20 per cent by replacing the MEMS sensors in an earbud with a single multi-sensor chip that is up to 10 times smaller, freeing up space for larger batteries.

A conventional micro electro mechanical system (MEMS) sensor package contains a chip with the MEMS sensor, and a chip with the control electronics resulting in a volume of 4mm3. By creating sensors on a nanoscale within the layers of its CMOS chip, Nanusens reports that the NEMS (Nano Electro Mechanical Systems) chip is only 1mm3, saving 3mm3 for every MEMS package that it replaces.

The more MEMS packages are replaced and their functions are performed by a multi-sensor NEMS chip, the greater the space savings, although the Nanusens chip increases slightly with every additional sensor function to accommodate additional control electronics. Nausens also points out that less PCB estate is needed compared to that required for several MEMS packages. The ‘extra’ space can be used to increase the size of the battery or add a supercapacitor to extend the battery life to give a better user experience.

The first product from Nanusens will be a 2D motion detector for earbuds in Q4 2019, which can be used to implement tap and double tap for control, wake-on-movement and sleep-on-rest functions.

Nanusens’ multi-patent pending technology enables it to create nano sensors inside the CMOS layers using standard CMOS processes within the same production flow as the rest of the chip production. This reduces the size and cost of the sensors, making them practical for price-sensitive applications such as smartphones, wearable technology and IoT devices.