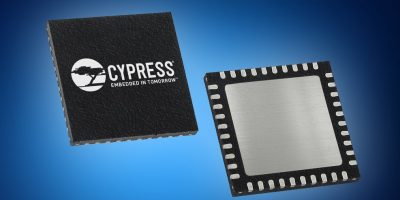 The low power microcontroller is optimised for IoT applications and complies with Bluetooth core specification version 5.0 (with LE 2Mbits per second optional feature) with support for mesh networking.

The system on chip (SoC) is based on a 40nm CMOS low-power fabrication process, and has a high level of integration to help reduce external components while minimising the footprint and overall cost of the application, explains Mouser.

The microcontroller subsystem of the Cypress CYW20719 consists of a 96MHz Arm Cortex-M4 microcontroller with floating point unit (FPU), 512kbytes of RAM, 2Mbytes of ROM (containing the stack and drivers), and 1Mbyte of probe-proof flash memory. The probe-proof flash, once programmed, prevents hackers from reprogramming the device to gain access to sensitive user data or payment information. It also inhibits competitors from doing a flash dump to reverse engineer the firmware IP, advises Mouser. For additional security, the CYW20719 includes security functions, such as ECDH, RSA, AES and SHA/MD5 hashing functions, as well as a hardware accelerator to ensure best-in-class encryption for Bluetooth, claims Mouser.

The CYW20719 is supported by the CYW920719Q40EVB-01 evaluation kit and the Cypress Wireless Internet Connectivity for Embedded Devices (WICED) Studio IoT development platform. This provides all the application programming interfaces, code snippets, and demo applications to accelerate the development process.

Mouser Electronics  is an award-winning, authorised semiconductor and electronic component distributor focused on rapid new product introductions (NPIs) from its manufacturing partners for electronic design engineers and buyers. The global distributor’s website, Mouser.com, is available in multiple languages and currencies and features more than five million products from over 700 manufacturers. Mouser offers 23 support locations around the world and ships globally to over 600,000 customers in more than 220 countries/territories from its facility located south of Dallas, Texas, USA.