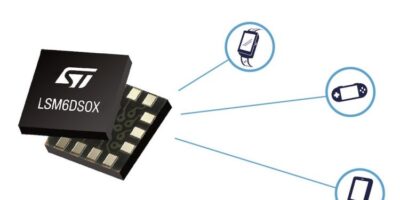 By integrating machine learning technology into its advanced inertial sensors, STMicroelectronics claims to improve activity-tracking performance and battery life in mobiles and wearables.

Smartphones and wearables equipped with LSM6DSOX can deliver a convenient and responsive always-on user experience without trading battery runtime, says STMicroelectronics. According to the company, the sensor also has more internal memory than conventional sensors, and a high-speed I3C digital interface, allowing longer periods between interactions with the main controller and shorter connection times for extra energy savings.

The sensor is easy to integrate with popular mobile platforms such as Android and iOS, simplifying use in smart devices for consumer, medical, and industrial markets, adds STMicro.

The LSM6DSOX is in full production and available now. It contains a 3D MEMS accelerometer and 3D MEMS gyroscope. It tracks complex movements using the machine learning core at low typical current consumption of just 0.55mA to minimise the load on the battery.

The machine learning core works with the sensor’s integrated finite-state machine logic to handle motion pattern recognition or vibration detection. Developers creating activity-tracking products with the LSM6DSOX can train the core for decision-tree based classification using Weka, an open-source PC-based application, to generate settings and limits from sample data such as acceleration, speed, and magnetic angle that characterise the types of movements to be detected, advises STMicro.

Support for free-fall, wakeup, 6D/4D orientation, click and double-click interrupts allows a variety of applications such as user-interface management and laptop protection in addition to activity tracking. Auxiliary outputs and configuration options also simplify use in optical image stabilisation (OIS).