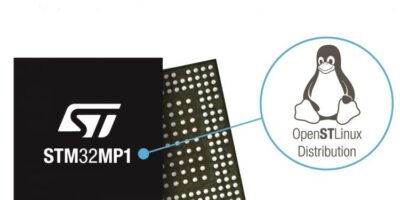 As part of its commitment to 10-year industrial-grade supply, STMicroelectronics has introduced the STM32MP1 microprocessor series with Linux distribution. According to STMicro, the multi-core STM32MP1 architecture is particularly suited to open-source software-based applications in real-time and power-constrained sub-systems

STMicro has applied its Arm Cortex expertise to expand the capabilities of its STM32 microcontroller to applications which require more performance, resources and large open-source software. The STM32MP1 multi-core microprocessor series has compute and graphics support combined with power-efficient real-time control to support developers of industrial, consumer, smart home, health and wellness applications.

The STM32MP1 series microprocessor uses the STM32-family ecosystem from ST and its partners, including tools and technical support.

Designers can use the STM32MP1 microprocessor series to develop a range of applications using the STM32 heterogeneous architecture that combines Arm Cortex-A and Cortex-M cores. The architecture performs fast processing and real-time tasks on a single chip, always achieving the greatest power efficiency, says STMicro. For example, by stopping Cortex-A7 execution and running only from the more efficient Cortex-M4, power can typically be reduced to 25 per cent. From this mode, going to standby further cuts power by 2.5k times – while still supporting the resumption of Linux execution in one to three seconds, depending on the application.

The STM32MP1 embeds a 3D graphics processor unit (GPU) to support human machine interface (HMI) displays. It also supports a wide range of external DDR SDRAM and flash memories. The large set of peripherals can be seamlessly allocated either to Cortex-A / Linux or Cortex-M / real-time activities. The STM32MP1 series is available in a range of BGA packages to minimise PCB cost and use the smallest board space.

The release of OpenSTLinux distribution has already been reviewed and accepted by the Linux community: Linux Foundation, Yocto project and Linaro. The distribution contains all the essential building blocks for running software on the application-processor cores.