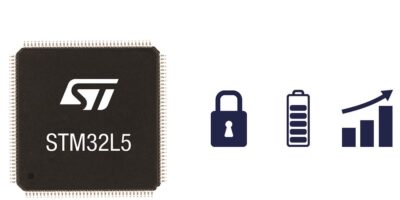 Security is a priority for the STM32L5x2 microcontrollers, released by STMicroelectronics. They have proprietary security which builds on Arm’s TrustZone technology and feature secure boot, full hardware isolation and crypto accelerators. They are also characterised by what is claimed to be best-in-class power management.

The low-power STM32L5x2 microcontrollers operate at clock frequencies to 110MHz. They start from the Arm Cortex-M33 32-bit RISC core with Arm TrustZone hardware-based security. Trusted computing was initially used for equipment such as desktops, mobile devices, and communication infrastructure, to authenticate devices connected to a network. It creates a protected execution environment for cyber-protection and sensitive code (cryptography and key storage) that blocks attempts to corrupt devices or software. A second, independent, execution environment allows for the running of untrusted code.

To this foundation, ST adds the freedom to include or exclude each I/O, peripheral, or area of flash or SRAM from TrustZone protection, allowing sensitive workloads to be fully isolated for maximum security. In addition, ST has engineered TrustZone to ensure support for secure boot, special read-out and write protection for integrated SRAM and flash, and cryptographic acceleration, including AES 128/256-bit key hardware acceleration, public key acceleration (PKA), and AES-128 on-the-fly decryption (OTFDEC), to protect external code or data. The STM32L5 also supports active tamper detection and secure firmware installation. STM32L5 has been achieved to PSA Certified Level 2.

Thomas Ensergueix, senior director, Automotive and IoT at Arm, explained the need to build security from the ground up, as  intelligence and functionality in IoT and embedded devices increase. “The STM32L5 series makes it easier for developers to build trusted PSA Certified devices based on the Arm Cortex-M33 processor, providing a robust and secure foundation for devices ranging from consumer products to industrial equipment,” he said

ST also adds its proprietary low-power expertise through adaptive voltage scaling, real-time acceleration, power gating, and multiple reduced-power operating modes. All are designed to enable the microcontrollers to deliver high performance and long run-times, whether powered by coin cells or even through energy harvesting.

An efficient switched-mode step-down regulator can be powered up or down on-the-fly to improve low-power performance when the VDD voltage is high enough. The resulting ULPMark scores, which are key measures of power efficiency based on real-world benchmarks developed by EEMBC, are 370 ULPMark-CoreProfile and 54 ULPMark-PeripheralProfile at 1.8V.

The STM32L5x2 microcontrollers offer 512kbyte dual-bank flash that allows read-while-write operation to aid device management. The flash ensures a high level of safety by supporting error correction code (ECC) with diagnostics. There is also a 256kbyte SRAM and features to support high-speed external memory including single, dual, quad, or octal SPI and Hyperbus flash or SRAM, and an interface for SRAM, PSRAM, NOR, NAND or FRAM.

The STM32L5 series is supported by the STM32 ecosystem and features its own STM32CubeL5 software package, which includes hardware abstraction layer and low-level drivers, FreeRTOS, trusted firmware-M (TF-M), secure boot and secure firmware update (SBSFU), USB-PD device driver, MbedTLS and MbedCrypto, FatFS file system and touch sensing drivers. The STM32CubeL5 features more than 300 project examples that can run on the STM32L552E-EV evaluation board, STM32L562E-DK discovery kit, and NUCLEO-L552ZE-Q. These projects can be compiled with the Arm Keil development tool, IAR or STM32CubeIDE toolchains, and are delivered with a STM32CubeMX configuration file, enabling easy customisation and code update.

The STM32L5x2 microcontrollers are in full production and available now in standard temperature grade (-40 to +85 degrees C) for consumer and commercial applications, or high-temperature grade specified from -40 to +125 degrees C for challenging environments.