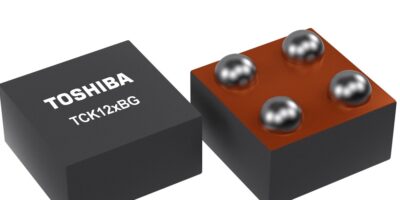 Three load switches released by Toshiba Electronics Europe, deliver a decrease in quiescent current (IQ) which extends the operating life of wearables and IoT devices that are powered by small batteries.

The TCK12xBG series load switches control the power supply for peripherals such as sensors. They can also be used to upgrade designs that are built around discrete semiconductors, advised Toshiba.

Each load switch features a new driver circuit, developed by Toshiba, which enables a typical on-state quiescent current (IQ) of just 0.08nA. This is a reduction of around 99 per cent, says Toshiba, compared with its TCK107AG.

The three devices are the TCK127BG, TCK126BG and TCK128BG. The TCK127BG offers automatic discharge that turns on at active high, the TCK126BG turns on without automatic discharge, and the TCK128BG turns on at an active low state. The devices operate from a supply (VIN) and control (VCT) voltage ranging from -0.3 to 6.0V. The output current (IOUT) is rated at 1.0A continuously and 2.0A for pulsed operation.

All three TCK12xBG devices are housed in the recently developed WCSP4G package that occupies just 0.645 x 0.645mm and with a height of 0.465mm, saving space in compact wearable and IoT designs. A coating on the rear reduces the possibility of damage to the devices during the mounting process.