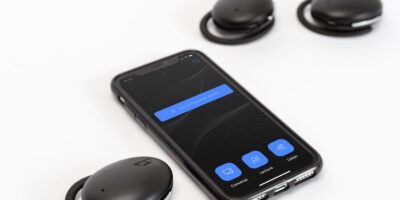 Appropriately for an international event, Waverly Labs is showcasing its Ambassador Interpreter over-the-ear device and app at MWC21. The ear unit fits over the ear and its far-field microphone array captures speech with “astounding levels of clarity”. The speech signals are seamlessly compressed and transmitted to cloud-based neural network engines to recognise, translate, and synthesise the speech into a fast, fluid translation.

In listen mode, Ambassador Interpreter actively listens for someone speaking near the wearer, up to a distance of 2.5m or 8ft, and translates their speech in a chosen language. Lecture mode is intended for groups and conferences. The Ambassador Interpreter can be set to translate everything the wearer says, and streams it through the smartphone’s loudspeaker or a paired audio system for an audience.

Battery life is up to six hours.