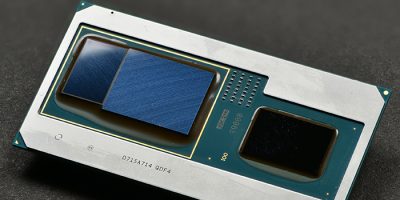 Described as a first-of-its kind processor, it has Radeon RX Vega M Graphics and features designed for gamers, content creators, virtual reality and mixed reality use. The latest Intel Core processor expands Intel’s portfolio thanks to its optimisation for small form factors like two-in-one devices from Dell and HP, thin and light notebooks, and mini PCs.

The resulting space savings will allow OEMs more freedom and flexibility to create innovative thin and light devices, says Intel. For example, many three-year-old systems weigh nearly seven pounds, last just four hours and are more than 32mm thick. With this new processor, enthusiast devices are slimmed down to under 17mm and can run up to eight hours on a single charge. There is also a real-time power sharing framework and software drivers.

Intel says that the 8th Gen Intel Core processors deliver up to three times the frames per second on thinner, lighter and smaller devices compared with similar systems from three years ago and up to 40 per cent compared with current discrete graphics. This will allow gamers to play the latest titles like Vermintide 2 in high resolution on-the-go or in their living room with smooth motion and vivid colours, for an immersive gaming experience.

Content creators can also do more with this new processor, whether it’s creating 3D images from scratch, editing videos seamlessly at home or on-the-go, or using the most popular creative applications, says Intel. Compared with a three-year-old PC with discrete graphics, content creation with Adobe Premier Pro is 42 per cent faster, says Intel.

The processors have the performance and graphics capability to run everything from Windows Mixed Reality headsets to Oculus, to watch live sports and movies, explore famous landmarks or play VR games on a PC that is sleek, thin and smaller than previously possible.

A variety of new 8th Gen Intel Core devices will be on display at Intel’s CES booth, #100048 in Central Hall South at the Las Vegas Convention Center (9 – 12 January).