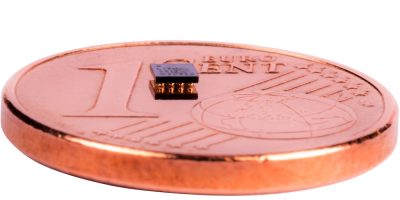 Panthronics has released early samples of what it claimed to be the industry’s first fully integrated NFC wireless charging listener device, the PTX30W.

The single chip PTX30W integrates an efficient rectifier, NFC tag, battery charger and power management as well as protocol handling. The NFC tag supports bidirectional data communication in NFC Type A mode. This enables the transfer of data between the charging cradle and the device under charge, such as the battery’s state of charge or fault indicators, as well as enabling firmware upgrades of both devices.

The PTX30W will work in tandem with an NFC poller such as the Panthronics PTX130W in a charging cradle. It harvests power wirelessly without the need for a microcontroller in the listener device.

It replaces four discrete components with a single chip and occupies less than half the board footprint, to save space  in products such as medical sensors, fitness trackers, smart watches, earbuds, hearing aids, smart glasses, smart rings and styluses, said Panthronics.

When paired with the Panthronics PTX130W, the NFC poller with the industry’s highest power output, the PTX30W can harvest up to 1W of power for fast charging of lithium-ion batteries, the company claimed.

Mark Dickson, chief marketing officer of Panthronics, said: “NFC wireless charging … operates via a small antenna and supports wireless communication as well as power transfer. Now with the development of the integrated PTX30W, Panthronics is offering device manufacturers a roadmap to even more space savings as well as a simpler system design for faster time-to-market.”

The PTX30W is sampling now to alpha customers. Customer samples will be generally available on the full release of the product later in 2022. Panthronics is presenting the PTX30W prototype demonstration kit at Embedded World (21-23 June) in Nuremberg, Germany, in Hall 1-139.

Founded in 2014, Panthronics is a semiconductor product company headquartered in Graz, Austria. It develops differentiated wireless solutions from the ground up for security and power applications.