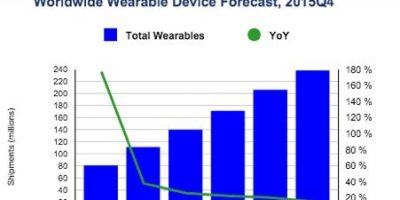 Worldwide shipments of wearable devices are expected to reach 110 million by the end of 2016 with 38.2% growth over the previous year. According to the International Data Corporation (IDC) Worldwide Quarterly Wearable Device Tracker, an expanding lineup of vendors combined with fast-growing consumer awareness and demand will generate double-digit growth throughout the 2015-2020 forecast period, culminating in shipments of 237.1 million wearable devices in 2020.

The market will also be driven forward by the proliferation of new and different wearable products. Watch and wristband shipments will reach a combined total of 100 million shipments in 2016, up from 72.2 million in 2015. Other form factors, such as clothing, eyewear, and hearables, are expected to reach 9.8 million units in 2016 and will more than double their share by 2020. This will open the door for new experiences, use cases, and applications going forward. Still, the primary focus of the wearables market will be on smartwatches.

“Although smartwatches like the Apple Watch or Android Wear devices capture the spotlight, they will only account for a quarter of all wearables in 2016 and will grow to about a third by 2020,” said Jitesh Ubrani, Senior Research Analyst for IDC Mobile Device Trackers. “It’s time to start thinking about smarter watches — traditional watches with some sort of fitness or sleep tracking but are unable to run apps—built by classic watch makers. These devices have the potential of making the technology invisible while still integrating themselves within day-to-day activities.

“By creating smarter watches, vendors also stand to side-step some of the typical challenges that smartwatch platforms face,” added Ubrani. “There’s no need to create a developer or app ecosystem for one thing, and there’s plenty of room for simpler devices that appeal to the average user while smartwatches continue catering to the technophiles.”

Meanwhile, smartwatches with an app ecosystem – like Apple’s watchOS and Google’s Android Wear – are expected to gain further salience in the market as both products and experiences evolve. “With few exceptions, this part of the smartwatch market is still in its initial stages,” said Ramon Llamas, Research Manager for IDC’s Wearables team. “We expect to see major changes, with smartwatches that actually look like watches, user interfaces that are easier than swipes and gestures, applications that rival those on our smartphones, and connections to networks, systems, and other devices. This puts pressure on smartwatch platforms to develop further from where they are today.”

Apple’s watchOS is likely to see some slowdown in the early part of 2016 as anticipation builds for the second generation device. However, with newer hardware and an evolving ecosystem, Apple will remain the smartwatch leader through the majority of the forecast.

Android Wear remains in second place as its list of partners grows and the platform further integrates into Google’s larger ecosystem. Google’s decision to limit UI differentiation will stifle further growth (unlike its success in smartphones) but this may have the positive side effect of forcing brands to compete on design and price, appealing to the fashion conscious, the budget conscious, or both. Adding Android-based smartwatches to Android Wear would push the category into first place in 2020. However, Android smartwatches are expected to remain a small portion of the overall market and will likely be relegated to emerging regions as local vendors attempt to differentiate themselves.

Real-Time Operating System (RTOS) – primarily used as a proprietary operating system but capable of running third-party apps – will become the third largest smartwatch OS, largely driven by gains in emerging markets and its use by Chinese ODMs. Appealing to consumers looking for a cheap alternative, RTOS devices will likely see relatively high adoption though the experience will be sub-par.

Tizen’s limited app ecosystem makes it a tough sell as a smartwatch, though this underdog has the potential to pose a serious threat to Android Wear if Samsung is able to provide some synergy between its lineup of Gear S watches and the rest of its consumer electronics portfolio.

Linux-based smartwatches will have similar appeal as RTOS-based devices. The focus will be low cost and adoption will be mainly in the Asia/Pacific region, excluding Japan.

Pebble’s avid fan base and unique hardware/software platform will enjoy modest growth in the short term. However, competitive pressures will cause it to gradually lose share to giants like watchOS and Android Wear.