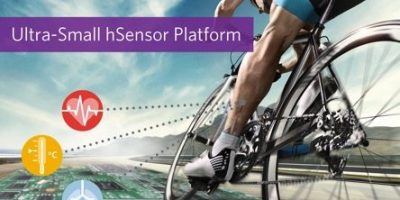 Maxim Integrated has identified eHealth and wellness as a significant market sector, and has announced the hSensor platform, with ARM mbed support to reduce the development time of wearable health and fitness applications.

The platform is based around the Max30003, the company’s low power Analog Front End, designed for wearable, battery powered and continuous acquisition applications. The intention is to bring sensors and wearable design to a new audience, instead of top tier OEMs, says Andrew Baker. The platform is designed to encourage developers, including the mbed ecosystem members to develop their own eHealth projects, with a selection of hardware, firmware and its library of open source software.

The MAXREFDES100# reference design includes a hSensor board, firmware with drivers, a debugger board and a Graphical User Interface (GUI). Designers can load algorithms for temperature, respiration, hydration and electrocardiogram (ECG) to customize an application. Firmware can optimize the design for the final product which can be chest straps, ECG patches, temperature patches, blood and oxygen measurement or devices worn on the wrist, according to the design specification.

This is the first implementation of the MAX30003, low power, single-channel, integrated biopotential AFE. Its low power operation makes it suitable for bedside monitors, wearable and battery powered devices, as well as those that require continuous acquisition of data, explains Baker. The hSensor platform includes the MAX30101, pulse oximeter and heart-rate sensor, MAX30205, a clinical grade temperature sensor that is the most accurate available, with ±0.1°C accuracy, compared to ±0.2°C of its nearest competitor, says Baker. There is also the MAX32620, low power, 32-bit, RISC ARM Cortex-M4F microcontroller, which is optimized for wearables. Addressing the battery powered, always on nature of wearable devices, the platform also includes the MAX14720 Power Management Integrated Circuit (PMIC), which is claimed to have the industry’s lowest quiescent current, to extend the battery life. There are also inertial sensors, for example, a three-axis accelerometer, a six-axis accelerometer/gyroscope, barometric pressure sensor, flash memory, for data logging, and Bluetooth Low Energy radio.

The company estimates that three to six months development time can be save in building a prototype, using hardware building blocks and the ARM mbed Hardware Development Kit.

There is no evaluation board at present, concedes Baker, but one is being developed for release.