Flexible displays are headed our way 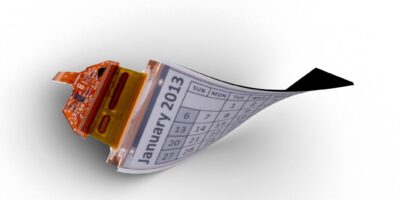 Flexible displays embedded into wearable devices need to withstand being worn for long periods of time, usually at times of vigorous activity, without being a drain on precious power resources, writes Caroline Hayes

One of the limiting factors in healthcare and medical monitoring, as well as in watches and jewellery, has been a clearly visible that can blend into the aesthetics of a wearable design. Flexible displays are creating a swathe of wearable devices, to the extent that the flexible displays market is expect to be worth $15.5billion in 2022.

Taiwan is emerging as the location for flexible display technology and development, through partnerships with European companies. One example of this collaboration is E Ink. The Taiwanese company, which has pioneered ePaper displays, has partnered with German plastic display designer and manufacturer, Plastic Logic. They have been developing flexible, glass-free electrophoretic displays (EPDs) for the last 10 years based on Plastic Logic’s organic thin film transistor (OTFT) technology.

The plastic displays are lightweight, robust and do not consume a lot of power, all of which tick boxes for wearable device design. The partners have renewed their master supply agreement (MSA) for EPD production, such as the Lectum displays, and to promote ePaper technology.

Glass-free Lectum displays are shatterproof and are used in designs that require a thin, lightweight, flexible display. They are bi-stable, so intrinsically low power, says Plastic Logic – only using a battery when an image is updated. As a result, battery charging is minimised and the battery itself can either thinner or a printed battery.

The use of a display is increasingly popular in wearable design to collect and relay patient data to doctors, hospital, treatment centres and research facilities. In developing countries, this mobile data collection and transmission, or mHealth, is enabling patients who may not have immediate access to clinics to be treated by a remote facility. This makes the need for lightweight and robust wearable monitoring devices, that are power-conscious, particularly pressing.

Another example of east-west co-operation is UK company, Smartkem, which has partnered with Chinese and Taiwanese OLED manufacturers over the last couple of years in a determined bid to make plastic displays a commercial reality.

Its truFLEX semiconductor technology is being used by manufacturers for light, flexible and low power displays. What’s important here is that the display does not drain the pressure battery resources of a wearable device, nor demand extra weight and capacity with another battery in the design.

Based in Manchester, England, the chemicals specialist, offers molecular design, synthesis, formulation, electronic prototyping and supply of organic semiconductors for displays on glass or plastic. It also offers support to scale up to production volume.

SmartKem has been focused on the transfer and scale up of truFLEX onto Organic light emitting diode (OLED) and liquid crystal displays (LCDs) display production lines in Asia. It reports it is now in the final stages of commercial adoption and scale-up of material production with the first display products anticipated to enter the market in 2018.