Flexible design is the key to what to wear 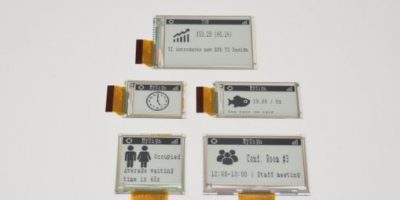 As wearables get smaller and integrated into more end devices, any display used will have to be as small and discrete as possible. If it can bend around a limb or end of a plane, that reduces the final form factor, making it more attractive for the end user.

Similarly, if the circuitry used in wearable devices can be flexible, then the PCB part of the design can also be inventive and not restricted to a flat, rectangle to be shoe-horned into the end format.

E-paper display manufacturer, Pervasive Displays, is collaborating with Texas Instruments to update e-paper displays (EPDs) which are Wi-Fi-enabled so that updates can be delivered quickly. (See softei.com 26 October 2016)

They can be controlled using the MQTT (Message Queuing Telemetry Transport) protocol (ISO/IEC PRF 20922). This M2M protocol operates on the publish/subscribe principle and is described as lightweight for messaging between constrained devices and low bandwidth, high latency or unreliable networks. This makes it the protocol of choice for many M2M or IoT devices, where bandwidth and battery power vie for space.

Becoming more important, particularly with healthcare, is security of data. The latest incarnation, MQTT V3.1, a user name and password can be sent with an MQTT packet. Encryption is via an SSL (Secure Socket Layer) protocol, operating independently of the MQTT.

The flexible displays can lend themselves to a multitude of designs, limited only by the designer’s imagination. In the case of the Pervasive Displays models, there are five panel sizes.

The flexibility issue goes deeper, with flexible circuitry integrated into wearable devices. Mark Forbes, director of marketing content, Altium, makes a case for a stacked PCB structure with flexible circuits that can fit small spaces, as well as be shaped. The design shape dictates the density of the circuits required, and as the market has found, the 90 degree bend – used in the clamshell phones – can make flexible circuits vulnerable. Ingenuity in both circuit layout and circuit design are called for.

Amongst the tips offered by Forbes, are staggered traces on double-sided flex, the use of teardrop pads to improve strength and yield and a stacked structure for the PCB with plenty of mounting support. Obviously, he also advocates a strong, clear line of communication, or data exchange is established between PCB software tool vendors and fabricators.