Emitter antennae are designed for motion capture in AR/VR 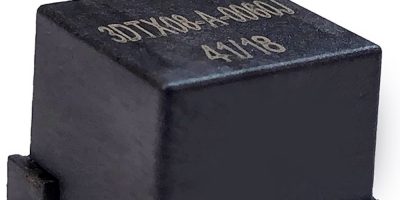 Devices which use motion capture, for example headsets, controllers, suits, gloves, as well as augmented reality and virtual reality (AR/VR) devices, are the target for Premo’s 3DTX10 and 3DTX08 family of emitter antennae.

The small, isotropic 3D antennae use electromagnetic motion tracking or motion capture technology which allows the real-time precise tracking of the position and orientation of objects in space, for tracking in video games and for industrial or commercial applications.

Electromagnetic technology offers some clear advantages in terms of line of sight, latency and precision, maintains Premo. The base of the Electromagnetic Motion Capture system is a 3D emitter antenna that creates a three-dimensional magnetic field (using different low frequencies for each one of the three axis of the space).

When an object that bears a receiver (or sensor) antenna enters the electromagnetic field, the electromagnetic tracking system can calculate accurately and in real time the object position and orientation in the environment. It does so using the information of rotation and position obtained by the receiver coil by means of a three-dimensional vector calculation system.

Premo offers both emitter and receiver 3D antennas in a range of sizes depending on the target range, size and energy consumption.

The same approach is used to capture movement of full body suits or gloves. In these six degrees of freedom (6DoF) applications, real high-precision and no limitations in terms of line of sight, ultra-low latency and lower consumption is needed while the size of the emitter antenna is to be as small as possible.

Samples of the full isotropic small 3D emitters (3DTX08-A-0060J and 3DTX10-A-0100J) antennae are available now. These parts will be delivered (in mass production) on tape and reel for SMT pick and place assembly according to EIA 481 (175 pcs/reel or 140 pcs/reel depending of the size 3DTX08 or 3DTX10). They have been engineered to be RoHS and REACH-compliant and have also been tested for endurance to comply with AECQ200 standards for automotive and IEC 68000 standards for industrial, wearable and general applications.