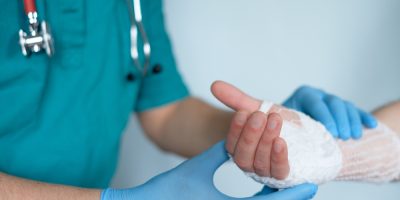 Dressing wounds prevents infection while the skin heals but today a bandage or dressing can play a more active role. Research into new materials and exploiting their properties is producing some interesting results, discovers Caroline Hayes

Printed electronics has offered opportunities for design freedom in a wide range of areas, from automotive to interior design but now it is being used for active healing.

A German company, Coldplasmatech is developing has Active Glow technology which creates cold plasma tailored specifically for the particular injury in order to accelerate healing. The nature of printed electronics is that it is lightweight and flexible meaning it can be applied to contoured areas. In the Coldplasmatech approach, an electrical charge produces cold plasma for fast, effective wound treatment. The electrical charge is delivered via a second element, the CPTcube. 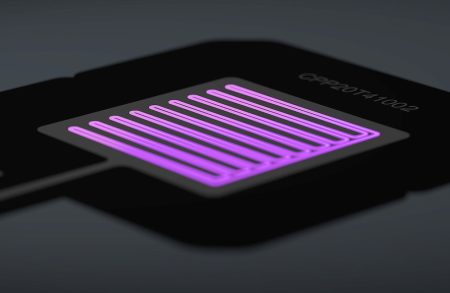 The EIF developed by Schreiner ProTech for the two-part Active Glow wound treatment being developed by Coldplasmatech.

Schreiner ProTech has developed an EIF (electronics in film) component which is used in the CPTpatch. This sits withing the film-based conductor structure which is made up of several functional layers, to produce the cold plasma. Being a wound dressing, the conductor has to be flexible and able to withstand several thousand volts without causing electric shock.

The precision of printing and die cutting is also critical as the treatment can be tailored for specific wounds.

In a related area of research, a team of engineers, physicists, chemists, and clinicians applied ultrasound to hydrogel bandages and found that it is able to adhere better to the skin, and therefore apply medication more effectively, even when the skin is wet. 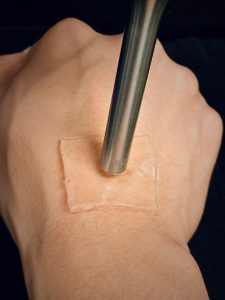 “Bandages, glues, and stickers are common bioadhesives that are used at home or in clinics. However, they don’t usually adhere well on wet skin,” explained Jianyu Li, assistant professor in the departments of Biomedical Engineering and Mechanical Engineering at McGill University, Quebec, Canada, who led the research team.

“It’s also challenging to control where they are applied and the strength and duration of the formed adhesion,” he continued.

The team used a thin sheet of hydrogel made from polyacrylamide or poly(N-isopropylacrylamide) polymers and seaweed-derived alginate gel. It was combined with a liquid primer containing chitosan or gelatin nanoparticles, or cellulose nanocrystals before a small ultrasound transducer is applied. The ultrasound waves travel through the hydrogel to produce small, vapour-filled cavities in the hydrogel. These microbubbles push the primer molecules down into the skin causing the dressing to stick to the skin. The greater the intensity of the ultrasound, the more the dressing adheres. 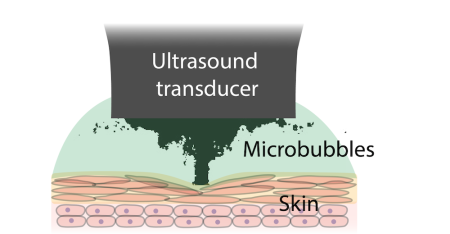 “We were surprised to find that by simply playing around with ultrasonic intensity, we can control very precisely the stickiness of adhesive bandages on many tissues.”

says lead author Zhenwei Ma, a former student of Professor Li and a Killam post doctoral fellow at the University of British Columbia.

Theoretical modelling can estimate exactly where the adhesion will occur. The research was conducted in collaboration with physicists Professor Outi Supponen and Claire Bourquard from the Institute of Fluid Dynamics at ETH Zurich.

The adhesive is compatible with living tissue in rats and pigs.

Looking ahead, a dressing infused with medication could deliver medication directly to a body part more effectively because of the strong adhesion to the skin and the flexible nature of the dressing to be used around the body contours.

The study was published in the journal Science.