Editor’s Blog – The world at your fingertips 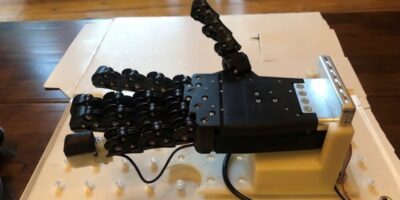 Scientists on both sides of the Atlantic have developed sensors that mimic the ability of human touch, writes Caroline Hayes

Hospitality robots have many sensors in their ‘fingertips’ to judge when they are holding something fragile and therefore need a light grip, or something more solid. To serve drinks for example, the robotic hand has to be able to sense when it is holding an empty paper cup that needs a light grip to avoid it being crushed but the sensors also need to relay when the cup becomes heavier as it is filled up, needed a stronger grip. And this calculation is something humans do all the time without thinking.

Researchers in the Tactile Robotics group at the University of Bristol have been working on imparting a human-like sense of touch to robots. It has developed tactile sensors and robotic hands and its 3D-printed tactile fingertip, the Tac Tip is a sensor for robotic hands which can give robots and prosthetic hands a sense of touch.

Robots are not as dexterous as humans because they do not have the sophisticated sense of touch that a human has when picking up and handling objects.

Research led by Nathan Lepora, professor of robotics and AI at the university’s Department of Engineering Maths at the Bristol Robotics Laboratory resulted in the tactile skin with papillae on the underside to mimic the dermal papillae which lies between the outer epidermal and inner dermal layers in human skin. The artificial fingertip was produced using a 3D printer which was able to mix hard and soft material to create the structure. 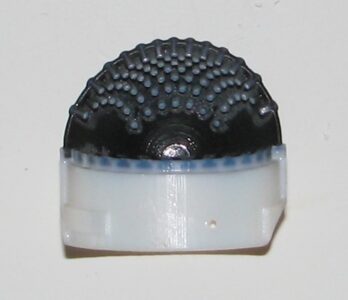 Section of the 3D-printed tactile skin, showing the ‘pins’ inside the dome to replicate dermal papillae in human skin. The white plastic is a rigid mount for the flexible black rubber skin. Photo credit: Tactile Robotics Group, University of Bristol.

Professor Lepora explained that a 3D-printed tactile skin for soft robotics could make robots more dexterous or it could be used to give a sense of touch to prosthetic hands to improve performance.

“We found our 3D-printed tactile fingertip can produce artificial nerve signals that look like recordings from real, tactile neurons,” he said. “Human tactile nerves transmit signals from various nerve endings called mechanoreceptors, which can signal the pressure and shape of a contact”. In 1981, electrical recordings from these nerves were plotted to study ‘tactile spatial resolution’ using ridged shapes. “In our work, we tested our 3D-printed artificial fingertip as it ‘felt’ those same ridged shapes and discovered a startlingly close match to the neural data,” said Professor Lepora.

He said the most exciting find was when comparing the recordings. “Those [1981] recordings are very complex with hills and dips over edges and ridges, and we saw the same pattern in our artificial tactile data,” he said.

Although there is a close match between the artificial fingertip and human nerve signals, it was not as sensitive to fine detail. This is possibly due to the 3D-printed skin being thicker than human ‘real’ skin. The team is now exploring how to 3D-print structures on the microscopic scale of human skin to make the artificial fingertip even closer to a human one.

As well as improving prosthetic hands and arms for patients, the ability for a robot to feel objects has uses in factories, where autonomous assembly lines can be more efficient and in food production where robotic hands can be used for picking and sorting soft fruit and delicate food items without damaging them. Other uses are in robot helpers in care homes for nursing duties where patients need to be handled sensitively. They can also protect first responders and support rescue teams in disaster areas or in dangerous environments. 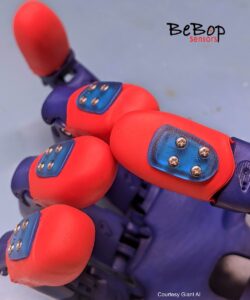 BeBop Sensors has fitted sensors onto thin fabric for a tactile covering.

BeBop Sensors has its sights set on a tactile skin for all parts of a robot’s physique. The smart fabric sensor technology company has developed RoboSkin, a 1mm thick skin for robotic limbs, fingers, feet, head and torso.

The RoboSkin can be custom-fitted to robotic limbs, arms, feet and torso.

RoboSkin provides spatial resolution and sensitivity that exceeds human abilities, said the company. Responsive surfaces make manipulation of objects natural, for example RoboSkin on a prosthetic hand will be able to click a computer mouse or turn a page in a natural movement. Another example is a robotic hand with tactile sensation will be able to pick soft fruit without damage. An advantage is that the robot will also be able to do this repetitive work without rest and will not require holiday or sick days.

Interaction with real world objects requires sensor feedback to adjust to changing conditions. Carebots with RoboSkin ‘feet’ will sense safety issues, such as IV tubes on the floor, said the company. 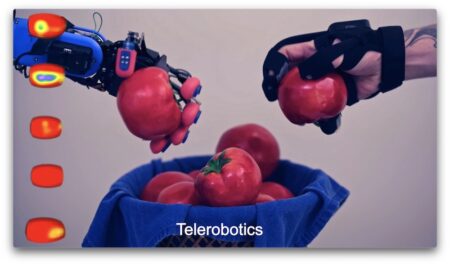 In addition to enhancing prosthetic arms or hands, BeBop believes the RoboSkin will drive the adoption of human-like robots. These are currently in use in workplaces, hospitals and homes where they are used for domestic help and in care homes where they are used in companionship roles. A responsive, tactile robot will offer enhanced interaction to be sensitive to its environments or its interactions. Other areas of use are in manufacturing, distribution, biohazardous environments and entertainment or hospitality.