Sports watches and asset trackers bring positioning data to users so they can track movements and activity. To date, the positioning has been approximate but Super-S technology developed by u-blox heightens positioning accuracy by tracking up to four global navigation satellite systems (GNSS). This means, that even in environments that can be problematic, such as natural canyons and urban ones, where tall buildings can obfuscate positioning data, wearables using the M10 receiver technology can provide more accurate positioning information more quickly than conventional receivers, says u-blox.

A critical parameter for wearable devices is that M10 consumes five times less than the company’s earlier GNSS-based technology – just 12mW in continuous tracking mode. This increases battery life, which is a fundamental requirement for wearable devices which rely on batteries.

u-blox has introduced the MAX- M10S GNSS module and the UBX-M10050 GNSS chipset, both based on M10 technology and the u-center GNSS evaluation software to support developers. No external components are required for use with the module, confirms u-blox. 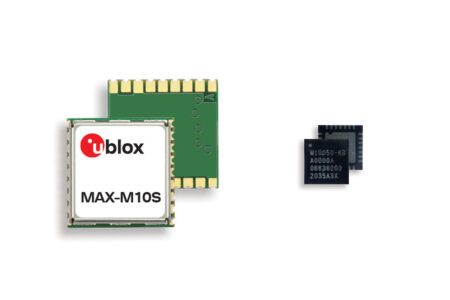 The receiver’s Super-S technology helps distinguish positioning signals from background noise, allowing the receiver to capture positioning data even when satellite signals are weak. It is also characterised by high RF sensitivity, enabling it to be used with small antennae, so that the form factor of a wearable device, such as a sports watch, can be minimised. This sensitivity also reduces the time to initialise the first position fix, which also contributes to lower systemic power consumption. A Super-E mode can be selected to further extend battery life, adds u-blox.

Raw GNSS data is analysed to detect spoofed signals, jamming strategies and the use of embedded filters to reduce in-band RF interference.

u-blox also offers the AssistNow GNSS positioning service. This can be free of charge or, for higher levels of support, there is a recurring fee.

Commenting on the launch, u-blox’s product manager, Product Center Positioning, Bernd Heidtmann, said: “We have increased concurrent reception of satellite signals by a GNSS platform from three to four constellations and improved the power consumption level five-fold compared to previous generations while shrinking the chip size by 35 per cent.”

Engineering samples of the UBX-M10050-KB and MAX-M10S have been available since November and initial production is scheduled for Q3 2021. The EVK-M101 will begin sampling in January 2021, with production also slated for Q3.

In another announcement, the Swiss company announced a deal with UK-based Focal Point Positioning to integrate its Supercorrelation technology into its GNSS systems for smart, wearable and tracking devices for smart health and wellness applications but also for smart city projects, using location-secure IoT technology.

This tracking technology addresses GNSS multi-path interference which can occur when satellite signals bounce off tall buildings, which impairs positioning outputs. At best, this can mislead urban users with a location dot in the wrong place or moving in the wrong direction. In autonomous vehicles it could lead to vehicles driving in the wrong lane, risking a collision.

Supercorrelation uses software to detect and reject reflected signals, to improve the performance of GNSS devices without requiring additional hardware or applications. It can also contribute to the detection and rejection of GNSS spoofing signals, which can prove disorientating in wearable devices but hazardous to autonomous vehicles, ships, and aviation systems.