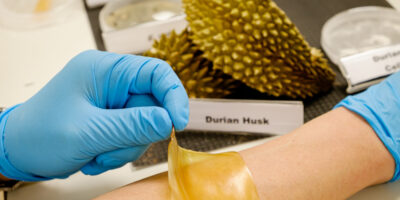 In the school playground, a plaster or bandage was a badge of honour but for adults they can be necessary inconvenience. Research in Singapore using the husks of the durian could mean the fix is part of the healing process, writes Caroline Hayes

Some cultures ban eating in public places, some countries frown on food and drink on public transport, but only Singapore has banned the tropical fruit, durian from all public transport because of its smell. Variously described as cheesy, garlicky, rotting onions, sewage, suphur “combined with old gym socks”, according to one food reviewer, the durian is a large, spiky fruit grown in south-east Asia. When ripe it falls from the tree but its spiky exterior has be negotiated with a sharp knife to reveal the custard-like flesh which is used in soup, juices, desserts and side dishes.

It has also been used for medicinal purposes for centuries; it contains Vitamin C and B6, manganese, potassium, riboflavin, copper, folate, magnesium and niacin as well as anthocyanins, carotenoids, polyphenols, and flavonoids which operates as antioxidants. These antioxidants may neutralize cancer-promoting free radicals. In one study, durian extract prevented a strain of breast cancer cells from spreading in a test tube. It also contains compounds thought to reduce cholesterol levels and a low glycemic index to lower blood sugar levels.

It is the compounds in the husk that piqued the interest of food science researchers at the Nanyang Technological University, Singapore (NTU Singapore).  It contains compounds with anti-bacterial and anti-yeast properties. The researchers extracted cellulose from the husks and combined with glycerol to create a soft gel, described as similar to silicon sheets. These sheets were cut into various sized bandages. To increase resistance, the research team added natural yeast phenolics (organic molecules from baker’s yeast) to increase resistance to bacteria. 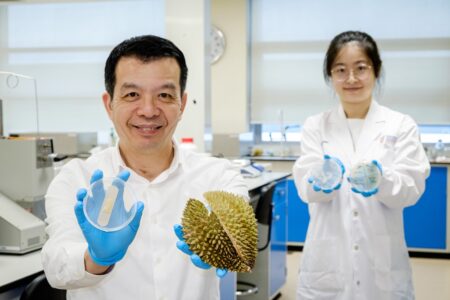 Conventional hydrogel patches are made from synthetic materials such as polymers like polymethacrylate and polyvinylpyrrolidine. Those with anti-microbial properties also use metallic compounds such as silver or copper ions. Hydrogel made from natural waste material could be a more cost-effective solution than synthetic materials.

Professor William Chen, director of NTU’s Food Science and Technology Programme, told the American Chemistry Society’s Sustainable Chemistry & Engineering journal: “With the growing threat of antibiotic-resistant superbugs, the world will need multiple alternative ways to prevent infections. An effective way to protect open wounds is with anti-microbial bandages that are bio-compatible and safe for prolonged use by humans. This is especially important for diabetic patients suffering from chronic wounds,” he added.

The embedded natural yeast phenolics will help to prevent the growth of bacteria such as Gram-negative E. coli and Gram-positive S. aureus. and the subsequent formation of biofilms (a layer of slime that can lead to antimicrobial resistance within a bacteria colony).

The anti-microbial hydrogels were tested as a wound dressing on animal skin and showed good anti-microbial effects for up to 48 hours. The bandage was laid across the wound, in the same way as commercially available silicone gel sheets are applied as dressing to reduce scarring after cosmetic surgery.

Professor Chen also experimented with cellulose from soybean pulp which is a waste product in soy milk production. The prototype hydrogel to conduct electrical signals could be a cost-efficient and sustainable source of medical treatment.

The team of researchers at NTU researchers are looking for industry partners to make the anti-bacterial gel bandage commercially available.