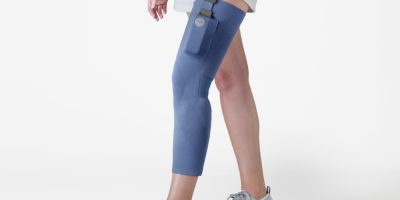 A new generation of intelligent sensors are being integrated into sleeves and exoskeletons. Caroline Hayes discovers their role is to monitor movement and to operate with software to create personalised muscle and limb support.

The Neural Sleeve uses AI to stimulate muscle activity and algortithms to predict and analyse position and gait. (Picture: Cionic)

The first company to introduce sensors for continuous motion analysis is Cionic. The Californian company has developed the Neural Sleeve which is fitted with sensors which continuously monitor movement in real-time to evaluate muscle firing and limb position. The Sleeve analyses, predicts, and augments a person’s movement and uses AI to help the neurological process of muscle stimulation and movement for those who are impaired or have weak muscles.

Although it’s called a Sleeve, it is for use on the leg to improve walking, increase strength and the range of motion or re-educate the muscle. AI is used to understand mobility.

Stroke suffferers, those with multiple sclerosis and other neurological disorders have difficulty walking not because their legs are damaged but because their brains don’t communicate effectively with their limbs.

Cionic’s founder and CEO, Jeremiah Robison’s daughter has mobility issues due to cerebral palsy and he says “I was frustrated the lack of solutions and the lack of technology to address her condition. As a technologist, I had all this opportunity to bring to bear all of the amazing innovations that we’ve seen in autonomy and apply those to the human body to give her something better than crutches, canes, walkers and wheelchairs,” he explains

The Cionic system reads the signal sent from the brain to the muscles and can predict a person’s movement 1/10th of a second before their foot lifts off the ground. Personalised algorithms deliver functional electrical stimulation to activate the targeted muscles precisely whether in the hamstring, the quadriceps, the calf or shin muscles. A proprietary read-write neural interface measures muscle firings and limb position to analyse every movement. 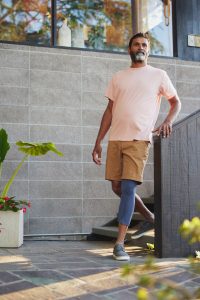 The Neural Sleeve offers users more mobility on stairs and other ‘obstacles’ that can be hard for conventional walking aids to negotiate. (Picture: Cionic)

The Sleeve’s dense array of sensors measure how the body is positioned and how individual muscles fire during movement. Sensors are able to predict the intended movement by measuring the electrical signal from the brain, and then algorithms analyse the data in real time to determine optimal muscle activation patterns.

The sleeve is an FDA-cleared wearable that has the potential to understand and influence wearers suffering from illnesses which affect mobility, including multiple sclerosis, stroke and cerebral palsy.

The lightweight design was created in partnership with Yves Behar’s San Francisco-based design agency, fuseproject, which has clients in the sports, technology and fashion industries. The sleeve is sleek enough to be worn under clothing and is available in a range of colours.

“It was imperative to us that the product not only has a significant improvement for users physically but also to remove some of the emotional burdens that come with having a mobility difference,” comments Yves Behar. “This meant building a product in tandem with potential users so we understood their needs and could create the best possible solution”.

Another design feature is that it is easy to take on and off and it has an eight hour battery life. “Good design serves to humanise technology and provide life-changing solutions,” says Behar.

“Building bionic clothing that can augment human movement takes a thoughtful and holistic approach,” says Robison. “It starts with advanced technology capable of adapting to each user’s mobility needs to deliver meaningful outcomes. Then we designed it to be comfortable to wear and effortless to use. . . .Ultimately we are creating not just a single solution, but a platform for bionic clothing that can analyse, predict, and augment human movement for all,” he adds.

An accompanying app for iOS and Android phones offers access to a library of exercises an educational resources to customise treatment. It also allows for wearers to monitor their progress and share data with medical support personnel.

The problem with conventional mobility tools, e.g., walkers, is that they can be cumbersome, draw attention to a disability and can be impractical for tasks such as walking up and down stairs. The Neural Sleeve allows users to wear a discrete sleeve which helps predict and adjust their movement for a degree of independence.

Dr. Jacqueline Nicholas, system chief neuroimmunology and multiple sclerosis at the OhioHealth MS Center, praises the Neural Sleeve. She says two of her MS patients walk better than they had in 10 years after programming the device to their needs. “This is the first comprehensive system that addresses key muscle groups of the leg, which means it has the potential to improve mobility and function with continued use,” she says. “It’s unlike anything I’ve ever seen.”

Trials have also shown that the Neural Sleeve helps wearers with improvements for dorsiflexion at heel strike and ankle inversion during swing – two key measurements associated with foot drop, limiting mobility. When combining the two measures, there was an average improvement of nine degrees for participants – with five degrees being deemed clinically significant. The Sleeve was also shown to reduced moderate to severe pain as well as a 75 per cent reduction in the number of users experiencing moderate to severe anxiety or depression.

Similar thinking for invisible support through the use of sensor data was applied in the Biomechatronics Lab at Stanford University. Researchers wanted to accelerate the optimisation of personalised exoskeletons which typically require lengthy testing periods “under unnatural laboratory conditions”. The researchers designed a portable ankle exoskeleton emulator which uses wearable sensors and report that it identified optimal parameters four times faster than laboratory conditions, while being energy-efficient. “We performed real-world optimisation using data collected during many short bouts of walking at varying speeds,” they report. “Assistance optimised during one hour of naturalistic walking in a public setting increased self-selected speed by nine  ± four per cent and reduced the energy used to travel a given distance by 17 ± five per cent compared with normal shoes. This assistance reduced metabolic energy consumption by 23 ± eight per cent when participants walked on a treadmill at a standard speed of 1.5 m s−1. Human movements encode information that can be used to personalize assistive devices and enhance performance.

The boot has a motor that works with calf muscles and can increase speed by applying torque at the ankle, replacing some of the function of the calf muscle. As users take a step, just before their toes are about to leave the ground the device helps them push off.

“On a treadmill, our device provides twice the energy savings of previous exoskeletons,” said Patrick Slade, who worked on the exoskeleton as a PhD student and a Wu Tsai Human Performance Alliance Postdoctoral Fellow at Stanford. “In the real world, this translates to significant energy savings and walking speed improvements.”

“The first time you put an exoskeleton on can be a bit of an adjustment,” said Ava Lakmazaheri (pictured), a graduate student in the Biomechatronics Laboratory who wore the exoskeleton in tests. “But, honestly, within the first 15 minutes of walking, it starts to feel quite natural. Walking with the exoskeletons quite literally feels like you have an extra spring in your step. It just really makes that next step so much easier.” 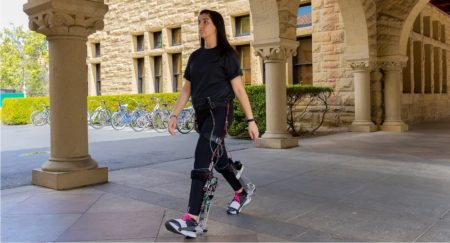 Unlike the emulator, the untethered exoskeleton can monitor movement using only inexpensive wearable sensors integrated into the boot.

The next stage of research will be to test the exoskeleton on older adults and people who are beginning to experience mobility decline due to disability. The researchers also plan to design variations that improve balance and reduce joint pain, and to work with commercial partners to turn the device into a product.

“This is the first time we’ve seen an exoskeleton provide energy savings for real-world users,” said Slade. “I believe that over the next decade we’ll see these ideas of personalizing assistance and effective portable exoskeletons help many people overcome mobility challenges or maintain their ability to live active, independent, and meaningful lives.”

“We’ve been working towards this goal for about 20 years,” says Collins, adding that he expects this technology is going to help a lot of people.