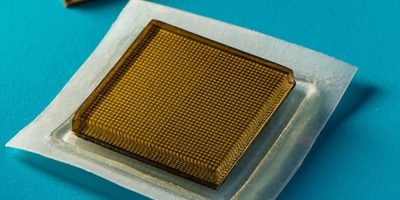 An ingenious patch, developed by researchers at MIT, could bring diagnostics to sports training and ultrasound imaging out of the hospital, discovers Caroline Hayes.

Usually, taking an ultrasound image requires dedicated equipment and trained technicians to manipulate the probes or transducers which direct sound waves into the patient’s body to be reflected back as images of organs or a baby in the womb. A research project at MIT (Massachusetts Institute of Technology) have demonstrated a small patch (2cm2 and 3mm thick) which can be adhered to the skin which could greatly simplify the ultrasound imaging process.

The bio-adhesive ultrasound (BAUS) device is a thin, rigid ultrasound probe that sticks to the skin with a soft, bioadhesive hydrogel-elastomer hybrid which does not dehydrate the wearer’s skin.

The elastomer layer sticks to the skin and the top layer adheres to an array of transducers designed and fabricated by the MIT team.

Over a period of 48 hours, the patch can provide continuous images of large organs like the heart and lungs, but also of blood vessels, muscles, the gastrointestinal tract and diaphragm.

The patch is connected to a commercially available ultrasound systems which translates the reflected soundwaves into images for medical staff to observe for diagnosis or to monitor the patient’s condition.

The patch addresses the problems associated with using gel for long periods of imaging because it can move away from the area of interest and dry out. Hydration is needed for the acoustic waves to penetrate the body to produce the images.

Ultrasound paddles need hydrogel to be hydrated and have to stay in place to allow the acoustic waves to penetrate the body.

For long-term ultrasound monitoring, holding the paddle against the body can be tiring – some hospitals use robotic arms for this purpose.

Earlier research has looked at stretchable ultrasound paddles but these have only been able to produce low resolution images as the transducers shift locations during a stretching action which distorts the image. They are also unable to be used for deep organ images.

The MIT patch provides high resolution images and is both elastic and stretchy. It can provide continuous ultrasound imaging of organs such as hearts and lungs, over a 48-hour period.

The durability of the adhesive format was tested when volunteers wore the patch on various parts of their bodies, including the neck, chest, abdomen, and arms. Wearing them, they performed a variety of activities, including sitting, standing, jogging, weight lifting and cycling. Live, high resolution images were still delivered, reported the team. In this format, the sticker is similar to heart-monitoring ECG patches and can continuously image internal organs without requiring a probe to be held in place for long periods of time, say the researchers. 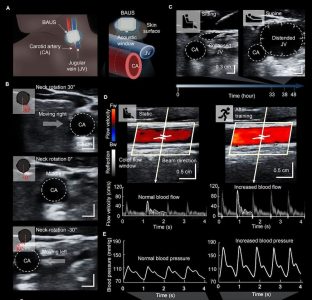 The resulting ultrasound images – with detail as fine as the diameter of major blood vessels, showed the changes in blood vessels when the wearer was seated and standing, as well as the changes in the shape of the heart during exertion from exercise and how underlying muscles were temporarily damaged during weight lifting. The data could be used in sports science to identify when muscles may become sore through overuse to avoid damage.

Other uses for the patches could be to monitor the progress of tumours and the development of foetuses in the womb.

The MIT researchers are working towards adapting the patch for wireless operation for use at the patient’s home.  “We envision a few patches adhered to different locations on the body, and the patches would communicate with your cellphone, where AI algorithms would analyse the images on demand,” says Xuanhe Zhao, professor of mechanical engineering and civil and environmental engineering at MIT and senior author for the study.

“We believe we’ve opened a new era of wearable imaging: With a few patches on your body, you could see your internal organs.”

Other lead authors for this study are Chonghe Wang and Xiaoyu Chen, with co-authors Liu Wang, Mitsutoshi Makihata, and Tao Zhao at MIT, and Hsiao-Chuan Liu of the Mayo Clinic in Rochester, Minnesota.

The research was funded, in part, by MIT, the Defense Advanced Research Projects Agency, the National Science Foundation, the National Institutes of Health, and the US Army Research Office through the Institute for Soldier Nanotechnologies at MIT.