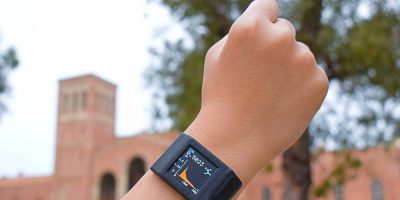 Just as the means of timekeeping has evolved – from the sundial to the town clock and then onto the wrist, now smart watches are evolving rapidly. Caroline Hayes looks at some of the developments.

Just telling the time seems rather pedestrian these days. A smart watch can be used for communications, with email and text alerts, but the functionality that has captured the most interest is healthcare and fitness monitoring. This has seen a wrist device being used to track heart rate during or after activity and also to help plan the activity and calculate its value according to selected parameters according to a person’s health concerns.

For outdoor exercise, the watch uses GPS data, which, like all data, needs to be securely managed. The habit of runners recording their routes, for example, was the ‘inspiration’ for crime novelist Peter James to base his latest story ‘I Follow You’ about a jogger-stalker.

James was alerted to the probability of tracking others was from his wife’s own ‘stalker’ experience when she used a running app to share information of good running routes.

Data security was behind the choice of the Trustonic Secured Platform at the heart of the Casio Pro Trek Smart WSD-F21HR smart watch (Figure 1). The watch is aimed at athletes and consumers who spend a lot of time outdoors and is equipped with GPS, offline maps, heart rate and VO2 max measurement.

The hardware-backed security enables enhanced smartwatch features, functionality, speed and ease of use, while protecting sensitive tracking and biometric data stored and transmitted by the watch. 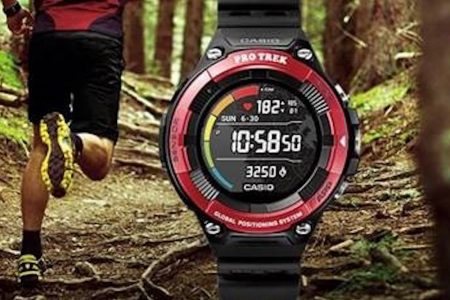 The TEE is a secure area of the main processor in a connected device which stores, processes and protects sensitive data in an isolated, trusted environment. It safely executes authorised security software, in isolation. These trusted applications enable end-to-end security by enforcing protection, confidentiality, integrity and data access rights. The TEE offers protects against software attacks, generated in the Rich OS environment and contributes to controlling access rights. It also houses sensitive applications, which need to be isolated from the Rich OS.

There are plenty of smart watches that can track heart rate and blood pressure but with the world in the throes of the Covid-19 pandemic, the work being done by Vagus.co, a UK-based ECG smart watch manufacturer is particularly pertinent.

The company has launched a crowd-sourced, open data study to collect as much ECG data as possible from a group which includes people who will potentially become infected by bacterial or viral diseases, including Covid-19.

Participants will use a Vagus ECG smart watch which is claimed to be the first which is able to quickly and precisely diagnose the interaction between the heart rate and breathing. Algorithms detect breathing from ECG data which it uses to calculate the respiratory sinus arrhythmia (RSA). This is used to measure the sensory network which feeds information to the brain about the condition of all the body’s organs.

The aim of the study is to obtain ECG data in the hope it will provide vital information of the disease progress and find new early detection and monitoring methods for cardiac-respiratory infections such as Covid-19.

Using a Vagus ECG smart watch, each participant will take three 90 second Vagus ECG Tests per day (one in the morning, one before a midday meal and one in the evening). After each test there is an option to include a health status note and body temperature measurements. If a viral or bacterial disease is being experienced, tests should be more frequent and ECG recordings regularly downloaded to a medical professional, advises the company.

People in the same household can use the same watch but must have a separate smartphone, Vagus app and user account. (The watch is waterproof and can be disinfected between each use.)

After 12 months, the anonymised data will be made available to researchers.

A further example of wearable devices being used for biochemical research is a project developed at the University of California, Los Angeles (UCLA). The adhesive film turns the smart watch into a biochemical health monitoring which uses indicators in the watch wearer’s sweat to monitor biomarker molecules which are read, processed and displayed on the smart watch.

The double-sided adhesive film (Figure 2) is attached to the underside of the watch. It detects metabolites and nutrients that are present in body sweat and which can be used as indicators of metabolism and general health. 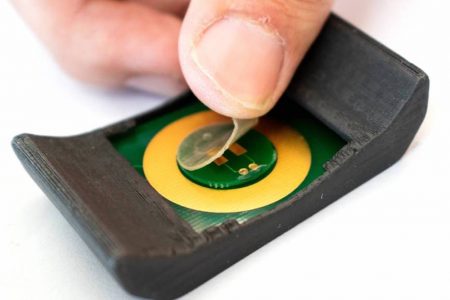 Figure 2: Double-sided film developed by UCLA is applied to the rear of the watch face (Picture: Yichao Zhao/UCLA)

According to Sam Emaminejad, an assistant professor of electrical and computer engineering at the UCLA Samueli School of Engineering, the film can be applied to smart watches to upgrade them, and other wearable devices, into “health monitoring platforms, enabling them to measure molecular-level information so that they give us a much deeper understanding of what’s happening inside our body in real time”.

The film collects and analyses droplets of sweat and the watch-facing side of the film turns chemical signals into electrical ones that can be read, processed and then displayed on the smart watch.

Graduate student Yichao Zhao and postdoctoral scholar Bo Wang are part of Emaminejad’s Interconnected and Integrated Bioelectronics Lab at UCLA and co-authored a paper on the project.

Wang explained that the team incorporated enzymatic-sensing layers in the film. “We specifically targeted glucose and lactate, which indicate body metabolism levels, and nutrients such as choline,” he said.

Creating sensors on a double-sided adhesive and vertically conductive film eliminates the need for external connectors, added Zhao. This not only saves space and weight in the design, both critical factors for wearable design, but also made it easier to integrate sensors with consumer electronics, he said. “We’ve also eliminated the effect of a user’s motion that can interfere with the chemical data collection.”

The team designed a custom smart watch and app and tested candidates who were sedentary, doing office work and others engaged in vigorous activity. They reported the system was effective in a variety of scenarios and that the film stayed on the skin and on the watch without the need for a wrist strap throughout the day.

Emaminejad said the technology could transform smart watches into bio-monitoring platforms. “We could capture multi-dimensional, longitudinal and physiologically relevant datasets at an unprecedented scale, basically across hundreds of millions of people,” he said.