Editor’s Blog – In-vest-ing in a sense of security 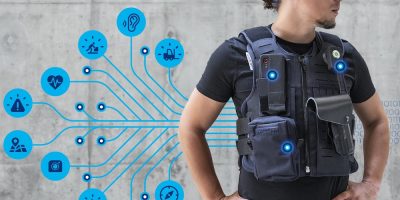 Wearable technology can be used with conventional safety clothing to protect high-risk staff.

Swiss security company, SOS Cash & Value’s security guards are equipped with Wearin’s protective vest with environmental and biometric sensors. Wearin’ is a spin-off of Fischer Connectors and is part of the Conextivity Group.

The security guards’ vests are fitted with environmental and biometric sensors connected to the monitoring centre in the SOS Cash & Value headquarters in Vernayaz. The Wearin’ dashboard in the monitoring centre’s warning system provides real time information from the vest. Algorithms in the sensors correlate movement, acceleration, positioning and biometric data which is continuously displayed in the monitoring centre. (The armoured vehicle is also equipped with a specific sensor). An alarm is automatically triggered when the system detects an abnormal situation such as a security guard falling over or stress caused by an incident such as an attack on the vehicle. Staff at the monitoring centre can communicate with security staff and decide on the actions needed, in combination with the emergency services and police forces, at the scene of the incident. 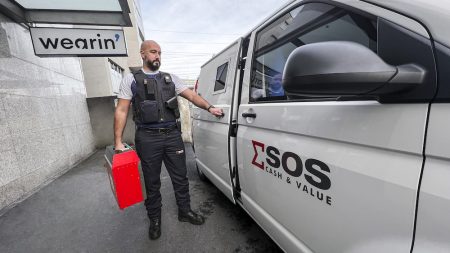 The bullet-proof vest developed by Wearin’ sends data to a central control system.

Pierre-Yves Glassey, CEO of SOS Cash & Value, describes the sensor-equipped vest as “ingenious”. It has been tailored by Wearin’ to the company’s specific needs, based on its experience and standards in security. “This high-tech bulletproof vest provides a security guard with exceptional safety,” he says.

“Since the encryption used by Wearin’ to encode our data is of the highest industrial standard, we are protected against any criminal intent to decrypt them,” Glassey adds.
The data collected by the sensors in the vest is processed by artificial intelligence and then displayed via on a security dashboard in the monitoring centre. Both parts of the system, sensors and dashboard are modular and scalable and can be adapted to the customer’s needs.

Moving onto other vehicles, the digital director of Scania, Sweden’s trucking and logistics company, Jonas Svanholm, analysed statistics and was concerned about the number of accidents and injuries to truck drivers at work.  He founded Swanholm Technology to make an everyday work garment smarter. He approached sensor software company, Imagemob and set about establishing how and where to place sensor for optimal reading, how to connect the vest to a smart phone or tablet and how the vest should be powered. In addition to being able to withstand the ‘usual’ conditions for a trucker, i.e. rain, wind, snow, the Alert Vest has to comply with the EN 471 class 2 safety standard. 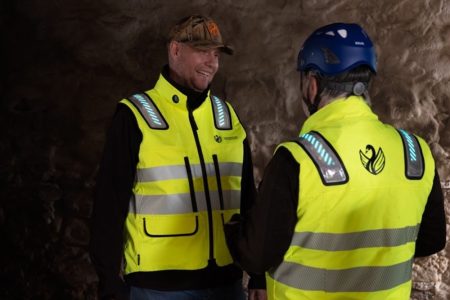 The Alert Vest Swanholm developed the vest in close collaboration with the vest manufacturers, embedded engineers, transport and construction companies. The software had to be developed and trained to detect falls. This involved a series of development iteration cycles before production in 2020 for the small change in the motion vector, followed by milliseconds of apparent weightlessness, and then a sudden, greater rate of change in the resulting acceleration vector, to be identified and characterised as a fall.

Sensors are at the nape of the neck to get consistent readings, with the lithium ion batteries and the embedded computer based on the tinyML machine learning technique, placed on either side of the vest.

A Bluetooth-connected accelerometer with Imagimob mobile capture app for Android was used to capture concurrent video which was the basis for machine learning to detect a fall.

Different scenarios were enacted by models wearing the vest to determine the motions that the accelerometer would pick up to determine the algorithms in the event of a driver falling from the seat of the truck, from the back when unloading, slipping on the ground or at the roadside.

It is also possible that a truck driver (or construction work, miner) could become dizzy, fall and remain unconscious but out of sight and without an alarm being raised that help is needed. The vest is therefore fitted with a timer which starts immediately when a fall is detected, allowing the user, if he/she regains his balance, to reset the vest in a grace period during which there is a series of warning beeps. After typically 30 seconds, an alarm is issued, sending notifications to peers, management and/or safety staff.

There is also a pushbutton switch on the front of the vest, to raise attention should an operator become stuck, wedged or otherwise pinned down and unable to call for help using their phone.

Imagimob’s tinyML models and applications firmware of the vest can be modified over the air using the smartphone.