Editors Blog – If you want to get ahead, get a headband 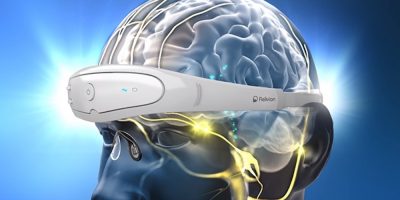 Scientists are discovering that headbands are effective in monitoring and treating some conditions. Caroline Hayes looks at some of the research and consumer products available

A 2019 study found that Sweden had earned the unenviable title of the country with the most teenagers at-risk of depression (41%). The country’s own statistics show that the number of adolescents treated for depression has increased since the turn of the century. There have of course been advances in treatment, many including technology and one is by Swedish start-up, Flow. The medical therapy company was founded in 2016 by Daniel Mansson and Erik Rehn. Its brain stimulation headset and app are medically approved in the UK and the EU to treat depression using brain stimulation. 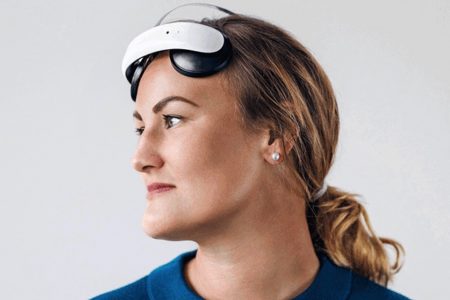 The wireless headset receives brain stimulation which is controlled by the Depression app on a smartphone. The headset delivers electrical signals to stimulate the front of the brain. Low activity in this area has been associated with depression. According to the company, the electrical signals rebalances the brain and symptoms are reduced. The app engages the user with self-help techniques, curated videos, meditation and mental exercises. It also analyses the wearer’s data to provide behavioural therapy. There is a chatbot therapist, developed by clinical psychologist and machine learning experts to engage the user in daily conversation.

One of the criticisms of psychiatric help is accessibility, either availability of professional help or the expense which may be prohibitive. Flow describes its headset and app as an always-on therapy source. It also provides anonymity and can reduce anxiety as users may get anxious talking to another human being. 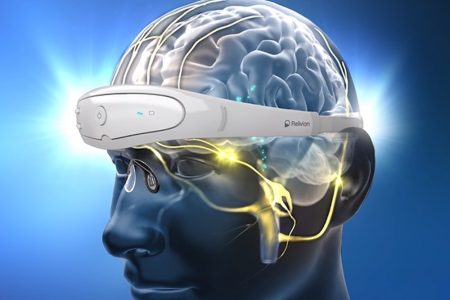 The headband uses three adaptive output channels to send precise, modulated pulses simultaneously to stimulate six occipital and trigeminal nerves around the head. These are then conducted directly to the brainstem. According to Neurolief, this goes further than existing non-invasive neuromodulation treatments which only stimulate the trigeminal nerve.

This stimulation releases neurotransmitters in the brainstem and modulates the brain networks associated with control of pain and mood to deliver treatments specific to the wearer.

An accompanying smartphone app adapts to personalise treatment. The self-learning system will adapt and improve the treatment over time. The system collects critical information from patients around the world, enabling the neuromodulation system’s treatment algorithms to be refined and improved.

The Relivion’s brain neuromodulation technology can also treat the majority of migraine sufferers. In a double-blind study 76% of patients who used Relivion for an hour after the onset of a migraine reported headache relief, compared to 32% in the control group. Treatment also had no adverse effects and there is no restriction on the duration of treatment, unlike many migraine medication.

The non-invasive measurement of brain activity is being used in the early diagnosis of dementia at the UVic Centre for Biomedical Research at the University of Victoria in Canada. The researchers are using headbands to measure brainwaves to identify different brain states, according to the levels of electrical activity.

Presently, tests for dementia are taken once the patient shows signs of memory or cognitive decline. By identifying early onset signs, help can be given earlier.

“I think it’s going to be a game changer, because we’ll literally be able to say: OK, this person should be getting follow-ups and treatments, and this person — you’re fine, don’t worry about it’,” Olav Krigolson, a neuroscientist and associate director of UVic’s Centre for Biomedical Research told the Times Colonist.

The team uses commercially available headbands to measure brainwaves and the lab is developing algorithms that identify different brain states, ranging from a healthy brain, mild cognitive impairment to someone with dementia or Alzheimer’s disease in an assessment that takes five minutes. If the test can be done at home, people at risk could test themselves monthly to increase the chances of seeking medical help at the earliest stages of onset.

The technology has already been used to identify fatigue, depression and concussions in other studies. The researchers will develop algorithms based on data gathered form these tests to identify different patterns in the brain related to dementia.