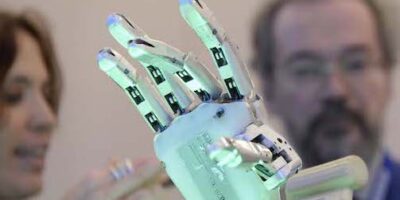 Visitors to MWC (formerly Mobile World Congress) in Barcelona next month, should stop by the Graphene Pavilion, urges Caroline Hayes

The pavilion is organised by the Graphene Flagship, a consortium of academic and industrial researchers tasked with taking graphene from the lab into the ‘real world’. It is an EU-funded consortium that is co-ordinated by Chalmers University of Technology, Gothenburg, Sweden.

There is a lot of interest in graphene-based sensors as the material’s size, strength and conductive performance make it so appealing for miniature sensor circuitry. Combined with a flexible substrate, commonly polyethylene terephthalate (PET), a thermoplastic polymer resin where it is used in fibres for clothing, or polydimethylsiloxane (PDMS) with graphene ink drop-cast in patterns, the sensors can be applied to, or woven into clothing or attached to adhesive patches that can applied directly to the skin.

At MWC2018, such an application of graphene sensors was demonstrated by ICFO (Figure 1). The Graphene Flagship partner demonstrated a graphene sensor as a ‘plaster’ which transmitted data via a mobile phone app showing how much sunlight the wearer has experienced to avoid skin damage from over-exposure to the sun, or to encourage more to boost vitamin D levels.

Although I cannot predict what will be shown in Barcelona next month, the Graphene Flagship is home to some academics that are using graphene for wearable end-products.

One is the Istituto Italiano di Tecnologia in Italy, which has demonstrated how graphene sensors can be used in biomedical devices such as robotic or prosthetic limbs. Graphene nerve sensors were used to control a prosthetic robotic hand. Sensors controlling both the motion and the force of robotic limbs, are able to optimise graphene’s fast response characteristics to create a natural movement and to grip with sufficient strength without causing damage or losing its grip.

Graphene material has also been used in footwear to monitor athletic performance. Another partner, the Cambridge Graphene Centre, University of Cambridge, for example, has used graphene foam insoles fitted with sensors to track the distribution of pressure. This can be used for sports training to ensure that an athlete is distributing weight and performing safely or identify if there is a weight imbalance that could effect performance. In medical applications, it can be used to assess podiatry issues and highlight areas of concern or potential harm.

Figure 3: Another step in the right direction – graphene insoles at the Cambridge Graphene Centre, University of Cambridge.

The advances made in the use of graphene and sensor development is leading to some exciting projects. Academics around the world are using graphene and exploring new ways in which it can be used. I would highly recommend anyone passing the Graphene Pavilion at MWC to stop and have a look at some of the work being done.