Connector insert battles into the future 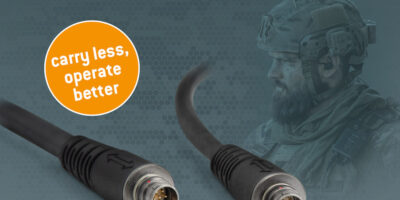 To modernise the armed forces, ODU believes that connectors will need to meet new challenges. The company has introduced an insert for the ODU AMC High-Density connector in size 0. The connector has a larger contact diameter of 0.7mm for higher robustness under heavy mechanical impact, says ODU. The seven-pin pole configuration offers a more future-proof alternative than any other six-pole NETT-Warrior connector, claims the company. It has been introduced to meet the high demands as performance requirements increase.

They will be used to meet future soldier programs – ASA in the US, GSA in Great Britain, IdZ-ES / Gladius 2.0 in Germany and GOSSRA in the EU. Military equipment will need connectors that meet the new challenges of climate extremes with low or high temperatures.

ODU has also built an insert that allows a USB 3.2 Gen1x1 plus 5A power transmission. It offers easier PCB-routing than the old version, which requires a more complex rigid-flex structure. This insert can also be used in wearable technology for military personnel, such as GPS, tactical computers, C4ISTAR-Sytems and for any application and market where size and weight are important.

The ODU Group supplies connector systems for reliable transmission of power, signals, data and media for a variety of demanding applications including medical technology, military, communications and security, automotive, industrial electronics, and test and measurement.

In addition to headquarters in Mühldorf am Inn (Germany), ODU also has an international distribution network and production sites in Sibiu/Romania, Shanghai/China and Tijuana/Mexico. The ODU Group sells its products globally through its sales offices in China, Denmark, England, France, Germany, Hong Kong, Italy, Japan, Korea, Romania, Sweden and the US, as well as through numerous international sales partners.