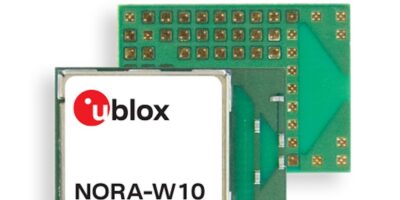 Combining Wi-Fi 4 and Bluetooth Low Energy (LE) 5.0 with a powerful open CPU, the u-blox Nora-W10 is designed for operation in harsh environments and low power consumption.

The successor to u-blox’s Nina-W10, Nora-W10 has improved RF performance, built-in high-capacity flash memory and low power consumption. The compact module builds on the Espressif ES32-S3 chipset which has a powerful dual-core microcontroller with artificial intelligence hardware acceleration capable of enabling speech and face recognition applications at the edge. It offers a range of hardware interfaces, including USB, CAN, SDIO and display and camera interfaces.

Nora-W10 offers single-band 2.4GHz Wi-Fi 4 (802.11b/g/n), targeting Wi-Fi applications which do not require the higher performance of more expensive Wi-Fi 5 and Wi-Fi 6 modules. The robust Wi-Fi connectivity and data rates are sufficient for many industrial applications, acknowledge u-blox. Wi-Fi 4 is projected to be the most widely used Wi-Fi technology in IoT applications until at least 2025, said the company.

Even when communicating over Wi-Fi, Nora-W10 can concurrently transmit data over Bluetooth low energy 5.0, which offers data rates up to 2Mbits per second or, using Bluetooth Long Range, can increase signal propagation distances up to four-fold compared to standard Bluetooth LE. Bluetooth mesh support extends coverage by relaying messages from node to node, added the company.

There is sufficient flash memory to support over-the-air updates, enabling the module to collect data from a smartphone via Bluetooth LE. For example in fitness equipment, data can then be transmitted over the on-premises Wi-Fi network for central storage.

EV charging stations can leverage the module’s Bluetooth LE 5.0 connectivity to simplify EV box configuration using the user’s smartphone. At the same time, charging data can be transmitted to remote service providers via a nearby Wi-Fi access point.

The module measures 10.4 x 14.3 x 1.8mm and comes either with a PCB trace antenna or antenna pins. It is pin / pad-compatible across the u-blox Nora module family.

First samples of the Nora-W10 module and evaluation kits will be available in June 2022.