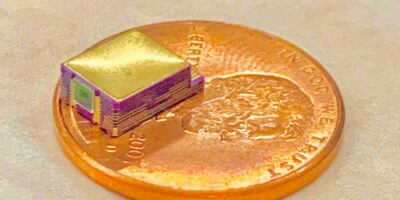 Augmented reality (AR) glasses are expected to become one of the most popular wearable devices in the coming years. At the same time, says TDK, head-mounted displays that use laser diodes as the light source are also forecast to grow by nearly 100x over the next 10 years.

Today’s colour laser modules, used in AR glasses are heavy and bulky, which results in glasses that are large and unattractive. TDK is developing a small light source module which will enable smaller, more stylish glasses.

The colour laser module is equipped with three lasers – red, green and blue – yet is less than the size of a US penny. The red, green and blue are combined, they can create a whole palette of colours across the spectrum, including yellow and purple, and even white, which is difficult to produce.

The module is pictured mounted in the Retissa Display 2, which is a pair of AR glasses from QD Laser. In addition to AR and virtual reality (VR) glasses, other applications for the colour laser modules are femto projectors and head-up displays for automotives.

TDK showed a prototype laser module with a compact size of just 6.7 x 5.5 x 2.7mm. The company proposed that it is used with a flexible printed circuit (FPC) connection, which is 8.0mm long, including the terminal. The full colour laser module weighs just 0.35g. All three laser diodes are mounted, with the wavelength of the red laser diode at 636nm, green at 520nm, and blue at 455nm, with the output power of each colour under 5mW. The module is equipped with a photo detector and a thermistor to monitor the internal temperature of the unit and prevent overheating.

Challenges for implementation are miniaturisation using a planar lightwave circuit and improving time to production. A conventional RGB laser module, with mirrors and lenses used for each colour which are then combined into one optical path, results in a quite large module. In this prototype, TDK uses a planar lightwave circuit from NTT to combine each colour into one optical path. PLC and bare laser chips are used in this new sub-assembly construction, which also requires fewer points to align the position. As a result, TDK says that its module is 10 times smaller than a conventional module.

The structure of the new sub-assembly also requires high-precision alignment, and TDK’s high-speed, automated technology transfers the laser chip, aligns it at high speed and high accuracy, and bonds it to the PLC. This process is performed automatically in five seconds, roughly 150 times faster than conventional modules.

TDK will start supplying samples this year, with production beginning in 2023.