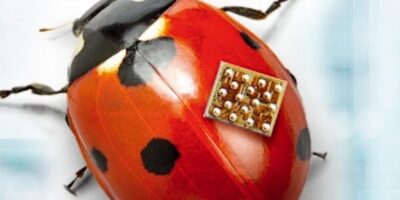 Claimed to be the world’s smallest and most power-efficient Bluetooth 5.1 SoC, the DA14531 and the DA14531 modules have been introduced by Dialog Semiconductor to simplify Bluetooth product development and enable wider adoption.

The chip, also known as SmartBond Tiny is in production now. It is specifically designed to lower the costs of adding Bluetooth Low Energy functionality to an application to as little as $0.50 in high volumes, fuelling the next wave of the IoT, estimated to span over one billion devices, predicts Dialog.

SmartBond Tiny enables a complete system cost reduction through a smaller footprint and size, explains Dialog, while maintaining performance quality. The DA14531 makes it possible to extend wireless connectivity to applications where it would have previously been prohibitive in terms of size, power or cost, especially those within the connected medical field, the company continues. Examples of target applications are connectivity for inhalers, medicine dispensers, weight scales, thermometers and glucose meters.

The SmartBond Tiny is half the size of its predecessors, and is available in packages as small as 2.0 x 1.7mm. The level of integration means that it only requires six external passives, a single clock source and a power supply to make a complete Bluetooth Low Energy system. These dimensions mean that the SmartBond Tiny can fit into designs such as electronic styluses, shelf labels, beacons or active RFID tags for asset tracking. It will also be critical for applications that require provisioning such as cameras, printers and wireless routers and be used in remote controls as a replacement for infra red (IR) or for other applications such as toys, keyboards or smart credit and banking cards.

SmartBond Tiny is based on a 32-bit Arm Cortex M0+ with integrated memories, analogue and digital peripherals, delivering a record score of 18,300 on the latest IoTMark-BLE, the EEMBC benchmark for IoT connectivity, Dialog reports. Its architecture and resources allow it to be used as a standalone wireless microcontroller or as an RF data pipe extension for designs with existing microcontrollers.

The SmartBond Tiny module is designed to balance running a high number of applications while keeping cost additions to the overall system as low as possible. At less than $1, SmartBond Tiny can be added to a system to fuel a new generation of IoT-enabled devices.

SmartBond Tiny and the module use just half of the energy of their predecessors, the DA14580 and DA14580-based module, as well as all other offerings currently on the market, says Dialog. The low power consumption ensures a long operating and shelf life, even with the smallest of batteries. The DA14531’s integrated DC/DC converter enables a wide operating voltage (1.1 to 3.3V) and can derive power directly from environmentally-friendly, disposable silver oxide, zinc air or printable batteries required for high-volume applications, such as connected injectors, glucose monitors and smart patches.