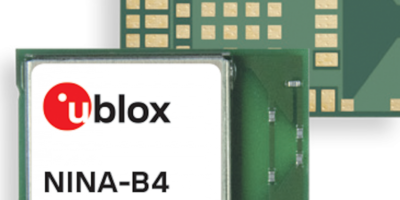 Features such as direction finding, long range and operation up to +105 degrees C make up the u-blox NINA-B4 series of standalone modules. They are designed for indoor positioning applications and for deployments in harsh environments.

Bluetooth’s new direction finding feature, part of the Bluetooth v5.1 specification, brings the benefits of high precision positioning to indoor applications, says u-blox. NINA-B4 is the first u-blox module designed to act as both a transmitter and a receiver in angle of arrival (AoA) and angle of departure (AoD) direction finding and indoor positioning applications.

In AoA-based implementations, stationary beacons equipped with multi-antenna arrays determine the angle of arrival of signals emitted by a tracking device to pinpoint the tracker’s location with sub-meter level accuracy. When AoD is used, the tracking device triangulates its position by calculating the angle of departure of signals from the stationary Bluetooth beacons’ multi-antenna arrays.

The NINA-B4 enables wireless mesh networks for robust communication between large numbers of connected devices. The networks relay messages from node to node and, by simplifying the control of groups of devices, can be used in smart lighting systems in cities and buildings. These applications also further benefit from the module’s enhanced operating temperature range (up to +105 degrees C).

Bluetooth long range is also a feature for the NINA-B4 series, making it suitable for deployments in harsh environments, e.g. to enable wirelessly connected and configurable equipment. Long range not only increases the distance that Bluetooth signals can travel in undisturbed environments, it also makes communications more robust and reliable in unfavourable ones, such as in production plants or on factory floors.

The NINA-B4 series is supplied with u-blox u‑connect software. It provides an interface to configure the required connectivity to integrate Bluetooth into new and existing products.

There is also a powerful Arm Cortex-M4F microcontroller with an open CPU architecture. This allows customers to run their own applications right on the module. Supporting Zigbee and Thread, the first members of the NINA-B4 family have an internal PCB antenna, or alternatively, are supplied with a U.FL connector for an external antenna of choice.

Samples of the NINA-B4 will be available in December.