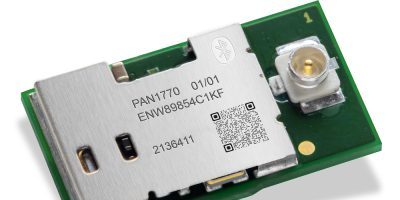 A Bluetooth 5 Low Energy module for applications deemed “radio-unfavourable” has been introduced by Panasonic.

The PAN1770 Bluetooth 5 Low Energy (LE) module includes a uFL connector which enables the use of an external antenna for use where difficult housing conditions shield radio waves.

“We have seen that in many devices or applications, radio waves emitted by the chip antenna can be blocked or reflected by the metallic housing, making it difficult to receive the radio signal from the outside”, commented Tomislav Tipura from Panasonic Industry Europe. Using the PAN1770 module, an external antenna can easily be attached via the uFL connector and thus redirect the radio waves outside the housing, he explained.

The module is based on Nordic Semiconductor’s nRF52840 single chip controller. It joins the PAN1780 Bluetooth 5 module from Panasonic.

Output power is up to 8dBm. The module is suitable for use in applications where a long range is required, due to the sensitivity of 95dBm at 1.0Mbits per second and -103dBm at 125kbits per second via the nRF52840 chip controller combined with the LE coded PHY, said Panasonic. Current consumption is just 4.8mA in Tx (at 0dBm), 4.8mA in Rx mode, 0.4 microA in system off mode and around 0.7 microA with RTC wake-up. These parameters make the module suitable for used in a battery-powered device.

It also includes a Cortex M4F processor, 256kbyte RAM and built-in 1.0Mbyte flash memory. The device can be used in standalone mode, eliminating the need for an external processor, while reducing complexity, lowering costs and saving space, said the company. The PAN1770 module also supports Type 2 near field communication (NFC A) for use in simplified pairing and payment systems, although an external antenna is required.