Arduino board can be sewn into fabric for e-textiles 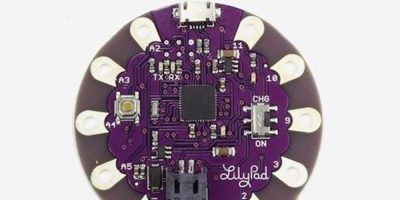 The LilyPad Arduino USB board is designed for e-textiles and wearables projects. They can be sewn into fabric and to power supplies, sensors and actuators with conductive thread. The board can be attached directly to a computer using only a micro USB cable. The LilyPad Arduino USB microcontroller board is available from Cool Components.

The board is based on the ATmega32u4. It has nine digital I/O pins (of which four can be used as PWM outputs and four as analogue inputs), an 8MHz resonator, a micro USB connection, a JST connector for a 3.7V LiPo battery and a reset button. It contains everything needed to support the microcontroller and can be simply connected to a computer with a USB cable or powered with a battery. Either power source is regulated down to the operating voltage (3.3V) by the on-board MIC5219.

The LilyPad Arduino USB is the latest version of the LilyPad boards. It differs in that it includes the ATmega32u4 which has built-in USB communication, eliminating the need for a separate USB-to-serial adapter. The LilyPad Arduino USB can therefore connect to a computer as a mouse and keyboard, in addition to a virtual (CDC) serial / COM port.

The ATmega32u4 has 32kbyte (with 4kbyte used for the bootloader). It also has 2.5kbyte of SRAM and 1kbyte of EEPROM (which can be read and written with the EEPROM library).

The ATmega32U4 is pre-burned with bootloader allowing developers to upload new code to it without the use of an external hardware programmer. It communicates using the AVR109 protocol.

It is also possible to bypass the bootloader and program the microcontroller through the ICSP (in-circuit serial programming) header. The holes are too small to insert pins but male header pins can be inserted into the ISP connector on the programmer and pressed against the ICSP header on the board (from above).

The board contains a MCP73831 LiPo battery charging chip. If the board is connected to both USB and a battery, the USB power will charge the battery. This is true regardless of the position of the switch. An LED indicates when the battery is being charged. The charging will stop automatically when the battery is fully charged.

The LilyPad Arduino USB can communicate with a computer, another Arduino, or other microcontrollers using the 32U4 for serial (CDC) communication over USB. (It and appears as a virtual com port to software on the computer.) The chip also acts as a full speed USB 2.0 device, using standard USB COM drivers. On Windows, a .inf file is required. The Arduino software includes a serial monitor which allows simple textual data to be sent to and from the Arduino board. The RX and TX LEDs on the board will flash when data is being transmitted via the USB connection to the computer.

A SoftwareSerial library allows serial communication on any of the LilyPad’s digital pins. The Arduino software includes a Wire Library to simplify use of the I2C bus.