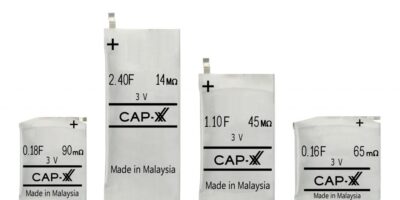 Peak power support to 3V coin cell batteries is provided by the 3V thin prismatic supercapacitors announced by Cap-XX. They also save on bill of materials (BoM) costs as they eliminate the need for a 2.7V low dropout (LDO) regulator for less expensive, smaller, more energy-efficient designs with extended battery life, says the company.

Specialising in supercapacitors that deliver peak power to support or replace batteries, Cap-XX will deploy its 3V technology initially in thin prismatic form to meet the demand for small, inexpensive, energy-efficient power for thin wearables, key fobs and other IoT devices.

The 3V supercapacitors eliminate the cost and inefficiencies of the low-dropout (LDO) voltage regulator or buck converter often required to step the voltage down to work with the industry’s existing 2.7V-rated thin, prismatic supercapacitors. Cap-XX is initially targeting markets using 3V coin cell batteries, where popular batteries such as the CR2032 have reasonable energy (approximately 220mAh) but have trouble delivering the peak power of around 100mA needed for data collection and transmission. Cap-XX says the 3V supercapacitors can be placed directly across the battery without the intermediary LDO.

Specific benefits of the 3V supercapacitors over 2.7V cells that require an LDO are savings in battery energy (up to 30 per cent over five years). Assuming constant power, an LDO dropping the battery voltage from 3V to 2.7V will lose 10 per cent of the battery energy. Additionally, assuming the LDO draws one-microA, an additional 8.8mAh (four per cent of a typical CR2032’s energy) is lost per year.

It also offers increased usable energy storage. For example, if an application operates down to 1.8V, then a 3V supercapacitor stores 42 per cent more usable energy than a 2.7V one, says Cap-XX. Power density is also improved by 23 per cent and low leakage current is also reduced. Leakage is approximately 1.5-microA for a 500mF cell at 3V. As the battery discharges and voltage reduces, the supercapacitor leakage current also reduces to about 0.7-microA at 2.5V.

The 3V supercapacitors are in production trials, with samples expected August 2018 and production in Q2 2019.

Cap-XX has announced it will integrate the 3V technology into its larger prismatic supercapacitors, automotive modules and other products for high-energy, high-power applications.